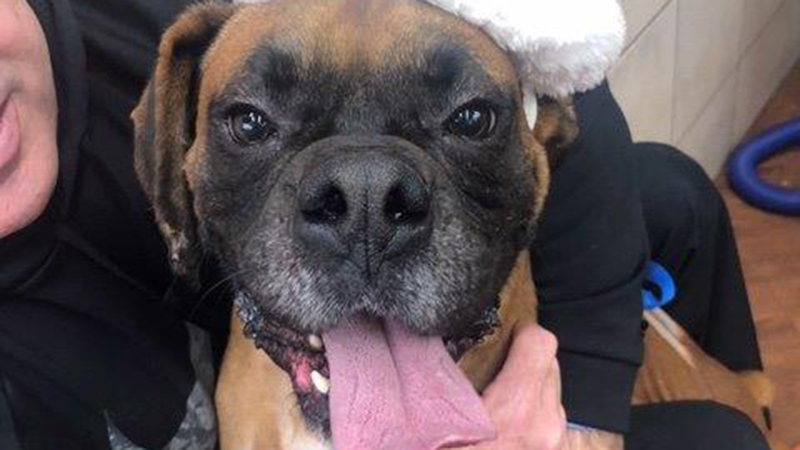 Ozzy, a boxer, was found tied to a satellite dish in LaGrange but now has a new home near Philadelphia. --Contributed

During the summer, LaGrange Animal Services found a dog tied to a satellite dish. The skinny dog named Ozzy was also heartworm positive and no owner could be located.

“We tried opening an animal cruelty case, but could never locate the owner of the animal,” said Chris Bussey, LaGrange Animal Services and Shelter supervisor. “So, we don’t know if he was actually just loose and dragging a runner behind him, or someone actually tied him up to a satellite dish.”

It’s the kind of story that doesn’t usually end well for the animal, but thanks to the hard work of many individuals — and the help of the Puppy Pipeline Rescue of Georgia — Ozzy was home with a new family for Christmas.

The dog was sent on the rescue line to Pets Plus in a suburb of Philadelphia in November and was home with its new family on Dec. 10.

“We try to rescue as many as we can and find a house for them, and fortunately for him, he got a home right away, which is something that we focus on because usually our turnaround is very quick,” said Dawn Bateman, Pets Plus director of animal welfare. “We’re glad to be able to help him.”

Bussey said when they found Ozzy they took him to Paws Humane Society in Columbus for treatment and contacted Mike Dougherty, founder of the Puppy Pipeline to see if he was interested in taking the dog in for one of its transports. Bussey said Ozzy was about one or two-years-old when he was found.

“Once the cuteness of a puppy wears off, they seem to be wandering the streets, and we pick them up or they’re brought to us for various reasons,” Bussey said.

Ozzy’s owners, Angela and Mark Eckardt, said it was love at first sight when Mark and their daughter saw him.

“He was just too cool,” Mark said. “I kept visiting him day after day (at the shelter), and he was still there.”

Mark said Ozzy was under quarantine when he first saw him in November, but paid for his deposit on Dec. 5. Mark said Ozzy is “the happiest dog around.”

“I can honestly say nobody spoils dogs more than us,” Mark said. “This dog got really, really lucky. I think we got lucky too, but he is pretty lucky”

Angela said Ozzy is still recovering from fly bites on his ears, but is a sweet dog. She said their family likes boxers.

“He’s just so trusting, and he’s just awesome,” Angela said. “He really is — so we’re very happy to have him as part of our family.”

Year in Review Part III: Looking back at July-September