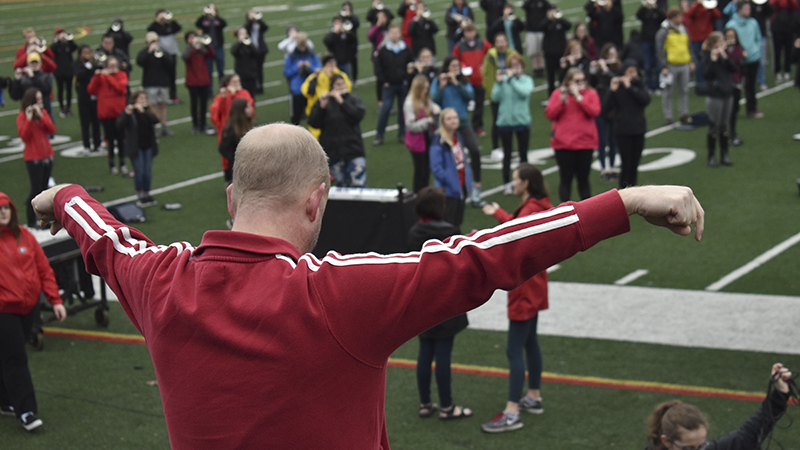 The Redcoat marching band warms up their instruments during practice at Callaway Stadium on Sunday. The band made a stop on their way to the Sugar Bowl. (Gabrielle Jansen | Daily News)

The University of Georgia Redcoat marching band traveled from the hills of the northland to make a quick practice stop at Callaway Stadium Sunday morning.

The marching band held one last rehearsal in LaGrange before continuing their journey to Mercedes-Benz Superdome in New Orleans for the Sugar Bowl.

Redcoat band director Mike Robinson said they picked up students in the band, flag line and Georgettes dance team in Atlanta and had more students to get in LaGrange. As a result, they decided to practice at Callaway Stadium.

“On a bowl trip, we are usually picking up students along the way, so we went to Atlanta this morning, picked up a bunch there and picked up some more here,” Robinson said. “Since there’s a nice stadium here with a turf field, we wanted to get in a rehearsal as well for an hour.”

Robinson said this is the first time the band has practiced at Callaway Stadium, and the Redcoats were preparing to perform the Aretha Franklin-themed show they did for the SEC Championship game on Dec. 1.

Robinson the practice in LaGrange was necessary, since they had not performed since the SEC Championship.

“It’s really, really nice of Troup County to allow us to stop here before we get to be on the road,” said Georgette Karson Pennington, a history and political science major. “We haven’t practiced in a couple weeks, so it’s nice that we have a place to go with people who are hospitable. It’s a great chance for the Redcoats to regroup before we get to go to the Sugar Bowl.”

The practice was open for fans to attend, and members of Troup High School and LaGrange High School marching bands went to watch. Lacey Stewart, THS student and captain of the school’s majorette line, said their band director let students know about the practice on the band’s Facebook page.

“I would love to be on their majorette line,” Stewart said. “I go to their jam fests, their little clinics that they have, and I hope to try out if I get accepted there.”

Many of the students said this was their first time watching a college marching band.

“I’m hoping to march with them one day,” said Dalton Coggins, a sophomore member of the LHS drumline.

For LaGrange native and senior Georgette, Hallie Hale, the experience of practicing at her old stadium was unique.

“My last practice as a Georgette is at my hometown, which is really unique and fun,” Hale said.

“All of my family came with all my friends.”

Robinson said they would practice at Callaway Stadium again if the opportunity ever reoccurs.