Five homicides occurred in City of LaGrange in 2018, tied for highest total in 20 years 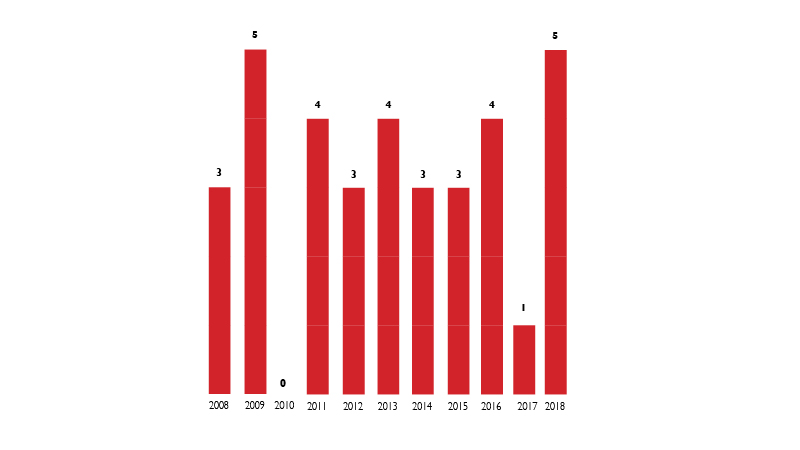 “We have had as many as seven back in 1997, which is a high,” LPD Lt. Dale Strickland said. “And then we’ve had a couple of years where we had no homicides — in 2000 and 2010 — so we are a little higher than where we’ve been in the past, and certainly higher than where we were last year.”

The last time there were as many as five homicides in LaGrange was in 2009, according to the LPD statistics.

The first homicide in 2018 occurred at Lady Elaine Street on Jan. 29. According to investigators, LaGrange resident Antonio M. Harris, was killed after multiple shots were fired into the residence he was at, and he was struck in the chest.

Strickland said that incident is still an open case, and the LPD is still searching for a suspect.

“There’s been no arrests made in that,” Strickland said. “It’s still an active case for us, and it appears to be, based on the investigation, gang related.”

The second murder in LaGrange occurred at the Whispering Pines apartments on May 8. According to a LPD press release, LaGrange resident Dale Obracay was stabbed multiple times by his partner Jeremy Sullivan.

By the time police responded to the scene, Sullivan had fled LaGrange but was found a few hours later near Evergreen, Alabama.

The third homicide in LaGrange occurred on Lexington Park Drive on June 27. Javontay Carr of Columbus, Mississippi, was shot three times in the torso.

Carr and Sellus Culvin, Anthony Morris and Christopher Jacobs allegedly attempted an armed robbery. According to the LPD, Carr got in-between others who were shooting and a victim’s car and was struck three times in the chest.

Strickland said Carr, Culvin, Morris and Jacobs also allegedly traveled from Columbus to commit the armed robbery. Jamal Holloway, of LaGrange, helped plan the robbery but did not take part, and Pam Barker of Columbus, Mississippi, was also arrested and charged for tampering with evidence.

Strickland said the fourth homicide case in LaGrange is still active. John Westley Davis was shot in the head on Houston Street on July 21, according to a LPD press release.

According to investigators, Davis was in a vehicle with a friend and his 15-year-old son when a dark colored vehicle stopped by their car and the suspect got out and started firing at their car.

The last homicide occurred on Dec. 23 near Troup Street. Niko Hurston was found with a gunshot wound in his chest.

The LPD identified the Troup Street shooting suspect as Dontaveous Sawaye Morgan, who is considered armed and dangerous. Anyone who sees Morgan is advised to call 911.

Strickland said it’s hard to predict homicides before they happen.

“However, if we ever get wind or information that something is about to occur, we definitely try to be proactive in addressing it either through crime suppression, details that we conduct or directly communicating with whoever’s involved about what information we’ve gotten,” Strickland said. “It’s almost impossible — unless you have some information in advance — to prevent some of these domestic related incidents, [or have] any idea that these people were coming from Mississippi to LaGrange to commit an armed robbery. Their intent was not to shoot one of their own during the robbery, but that’s what occurred. That’s not anything that we could foresee.”

Strickland said the LPD has received a few tips on the open cases from the community but not as many as they’d like to receive.

Strickland attributed it to a national culture of people not wanting to provide information so they don’t get in trouble.

“Law enforcement around the country and prosecutors are fighting that same battle in getting folks to come forward and stand up, so people could be prosecuted,” Strickland said.

Strickland said people can provide information in active cases without anyone knowing.

“We’re always open, and we always want to speak with witnesses or concerned citizens in the community about these crimes,” Strickland said. “If they have information, there are ways to speak with us, so that there’s not a marked police car or a uniformed officer who pulls up and knocks on their door. They can communicate with us via text. All of my detectives have cell phones they’re assigned, and they can receive text messages. They can call 911, and 911 can provide our telephone number. We can turn around and call them so that we’re not necessarily on the scene for everybody in the community to see.”

Tips can also be sent via Facebook messenger to the LPD.