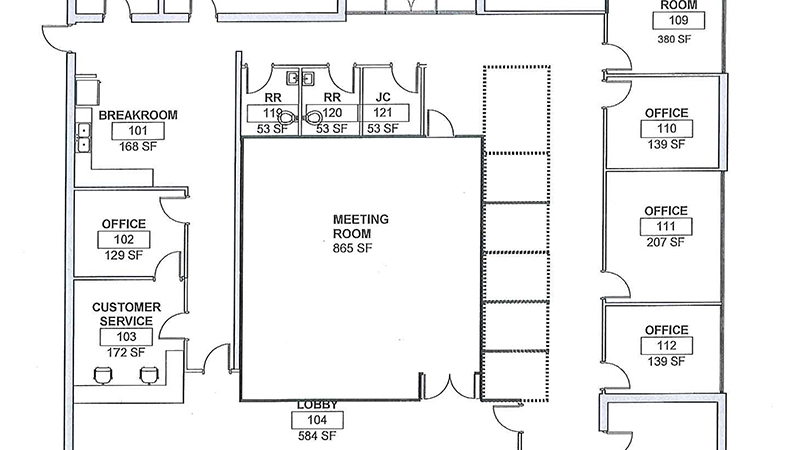 The Hogansville City Council unanimously voted Monday to move forward with renovation plans for the PNC Bank building, which will eventually become home to city hall.

The council decided on Option A, a renovation plan that will place a meeting room at the center of the building and include five offices. It will cost $136,070.

The council considered two options Monday, choosing the more cost effective one. Option B would have placed cubicles at the center of the building, which was labeled as a work room, would have included a utility clerk office and would have cost $180,576. Before the vote, Council Member Fred Higgins asked why there was such a difference in cost between the plans.

“Putting up drywall and two-by-fours is an awful lot cheaper than putting in cubicles or modular work stations,” Milliron said. “Option A was designed to be the most cost-effective efficient way to get us in city hall and be operational and keep the costs down.”

Council Member Theresa Strickland asked where the council would go during executive sessions if they picked option A. Milliron said the conference room where they could meet is about 20-feet away from the meeting room.

Mayor Bill Stankiewicz said there are double doors to the front entrance of the building and secured doors inside the building for reaching customer service. Stankiewicz also said that the rear entrance to the building will be secured, and only employees would be able to enter through it.

“The only entrance point will be the front of the building into the lobby area,” Stankiewicz said. “There are restrooms there, and there’s a customer service area there.”

Stankiewicz said there will still be a drive through window in the building for customer service.

Following the discussion, the council voted 5-0 to pick Option A.

The next steps for the building are for 2WR+Partners in Columbus to generate engineering plans.

Stankiewicz said on Tuesday that while he doesn’t know when the renovation will be complete, he guesses they will move in by the end of summer.

The PNC Bank ATM at the location will remain, even when the building eventually opens as city hall.

In other actions, the city council:

Cause of death still unknown for deceased newborn found…