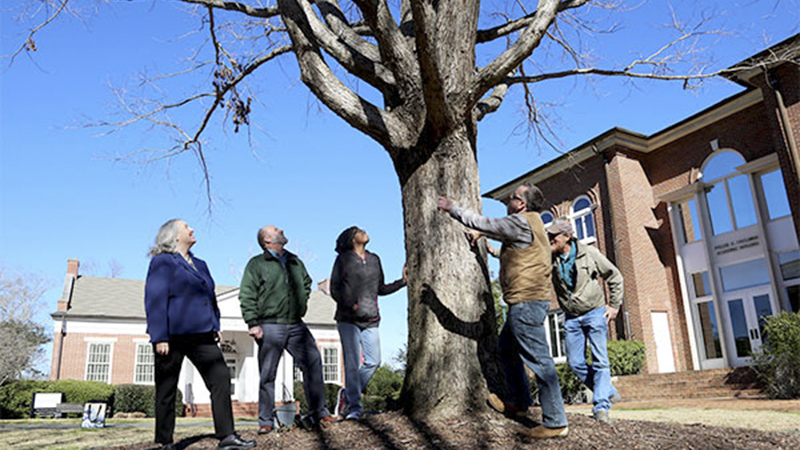 LaGrange College has earned the Tree Campus USA designation from the Arbor Day Foundation, according to a press release.

LaGrange has been a Tree City for 18 years, and Appleby said it was only natural to follow its lead.

“We had been talking for quite a while about turning the campus into an arboretum because of our great wealth of trees,” Appleby said. “We started in 2017 by beginning an annual Arbor Day celebration.”

In 2017, the Sustainability Council planted a Chinese Fringe tree on the plaza where a diseased pecan tree had been taken down. In 2018, they planted a White Kousa dogwood by Callaway Auditorium.

Sam Breyfogle, a community forester with the Georgia Urban Forest Council, suggested to Appleby that the college become a Tree Campus. After doing some research, Appleby learned five standards had to be met to earn the distinction.

“First, we had to set up a tree advisory committee,” Applebee said. “Then we had to create a campus tree care plan, dedicate annual expenditures to tree care, observe Arbor Day and engage students in tree-related service learning projects. We were already doing most of these things, so we just needed to formalize it and document it.”

About that same time, she learned Dr. Mark Yates, associate professor of biology, had already started working on a campus tree care plan, so they decided to join forces.

“Becoming a Tree Campus was really a joint effort involving the entire sustainability council,” Appleby said. “Michael Coniglio of National was a key player — he supplied important information for the application and is also in charge of caring for our campus trees. He is the ultimate authority on LaGrange College trees, so his support was invaluable.”

Coniglio said a certified arborist makes an annual inspection of trees on campus, especially those that have shown signs of distress, as was the case of a water oak next to Manget that had to be removed this past summer.

“It had been on the short list for eight years,” Coniglio said. “We actually had a tree care plan for it, in which we selectively pruned and fertilized it to see if it would respond. Unfortunately, it began showing more signs of decay and dropping limbs. It became a safety concern, not only to the surrounding facilities, but also to pedestrians and vehicles.”

Ultimately, another tree will be planted in the Manget location, although Coniglio said a decision on when and type of tree hasn’t yet been made.

“She is a great environmental activist,” Appleby said. “We’re lucky to have her working with us.”