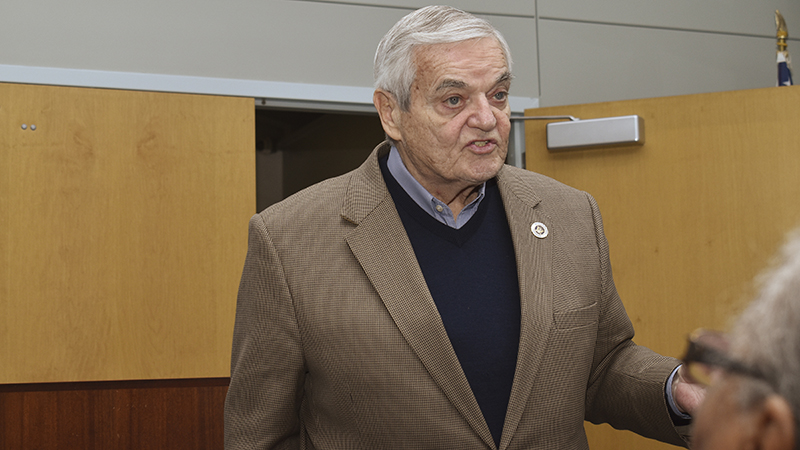 Hogansville Mayor Bill Stankiewicz gave a state of the city address about last year’s progress of the town Thursday night at the Hogansville Public Library. Stankiewicz emphasized to the audience the need to get involved with the city and speak to its leaders.

Stankiewicz also said the solution to the city’s debt and small population is growth. He mentioned the 634 platted new units and 372 planned units in Hogansville.

“The population today is virtually the same as it was in 1999 when I moved here,” Stankiewicz said.

The city’s new wastewater treatment plant is currently under construction and is scheduled to be complete in 2020.

Stankiewicz then talked about the PNC Bank building renovation, which is where city hall will move when it’s completed. The Hogansville Charitable Trust, a local nonprofit, purchased the building and donated it to the city.

“We hope that everything will be completed and will be moved into the new city hall during this calendar year,” Stankiewicz said. “The benefit of this plan is in almost every case, we utilize the existing structure. There’s not a lot of little additional construction.”

With city hall moving out of the Royal Theatre, the theater will be renovated as a community arts space. It will hold performances and have a screen for film showings.

“It will never be an 800-seat theatre [again],” Stankiewicz said. “At one time, this was the largest theatre between Atlanta and Columbus.”

The city was given a grant by the Georgia Historical Society to purchase and install a historical marker recognizing former postmaster Isaiah Lofton, who survived an assassination attempt.

The city council passed the downtown revitalization master plan, which has already begun. The city council also adopted a corridor plan for each of the gateways leading into Hogansville.

Stankiewicz said the city completed a Community Development Block Grant for sewage system improvements, and another grant-funded project is underway to complete water and sewer improvements.

“[CDBG] funds are so critical to small cities success and providing the infrastructure that we talked about earlier to allow for growth,” Stankiewicz said. “Without that infrastructure, growth won’t happen.”

Stankiewicz said the city was designated as one of 18 rural zones in Georgia and was given a tax credit.

Near the end of the address, Stankiewicz talked about AMC filming scenes of an episode of “Walking Dead” in Hogansville last year. Stankiewicz said the city will be featured in an episode that will be tentatively released on March 3 at 9 p.m.

“We have some pictures we took at the time that were embargoed for release until the show airs. At 10 p.m. after the show is over, those photos will be available,” Stankiewicz said. “It was a fun day in Hogansville. We had people come from all over the country literally to watch the filming.”

Stankiewicz ended the meeting asking the audience to make sure to talk to him.

Also at the address, Stankiewicz:

4Recognized Pastor Terry Rainwater and God’s Bread Basket for 10 years of work in the city.

4The nonprofit has distributed about 95,000 pounds of food.