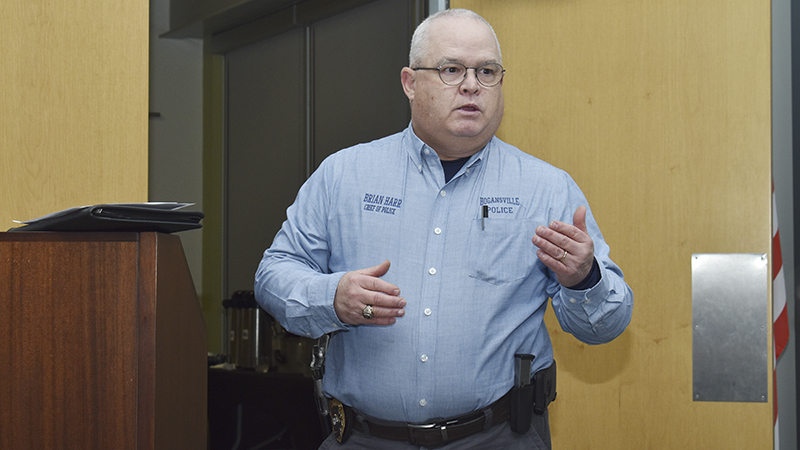 Hogansville Police Chief Brian Harr gave the department’s 2018 report Thursday at the Hogansville State of the City. Harr reported that there was a 31 percent decrease in part one offenses, including burglaries, robberies, aggravated assaults and rapes, and a 53.7 percent increase in reported thefts and motor vehicle thefts.

“The real big one that I’m really proud of, for the fifth straight year, is we have reduced robberies and burglaries in the community with the help of the community,” Harr said. “When I took over in 2014, we were at something like 30 or 40 burglaries per year.”

According to HPD statistics, the department wrote 908 reports, which increased 25.5 percent from 723 reports from 2017.

“We received fewer calls, but we wrote more reports and that [is because] we are taking a little more time,” Harr said.

“Officers are stopping to try to solve the issue before it becomes a problem. We’re documenting that, so I’m really pleased with the personnel that we have.”

“We dropped our arrests because of de-escalation, community involvement, and we don’t feel the need that we have to take a person to jail just because we can. That has a negative effect on the community,” Harr said.

Harr said the department has been working with more juvenile offenders to prevent re-entry and has been trying to be more active in the community.

“We set goals every year in January of where we’d like to see the police department (go), not just as a department as far as (reducing) crime, but what we’re doing in the community (as well),” Harr said.

Harr said the HPD received a Bureau of Justice Assistance grant to fund new body cameras for all police officers.

“With the assistance of a federal grant, we were one of only four agencies in the state of Georgia … awarded a federal grant to resupply and reissue brand new, up-to-date body cameras for every one of our police officers,” Harr said.

According to Harr, citizen complaints and use of force incidents dropped by more than 10 percent from last year.

For community outreach, Harr said the HPD launched its Facebook page, helped host the Easter egg hunt at Hogansville Elementary School and participated in the local trunk or treat.