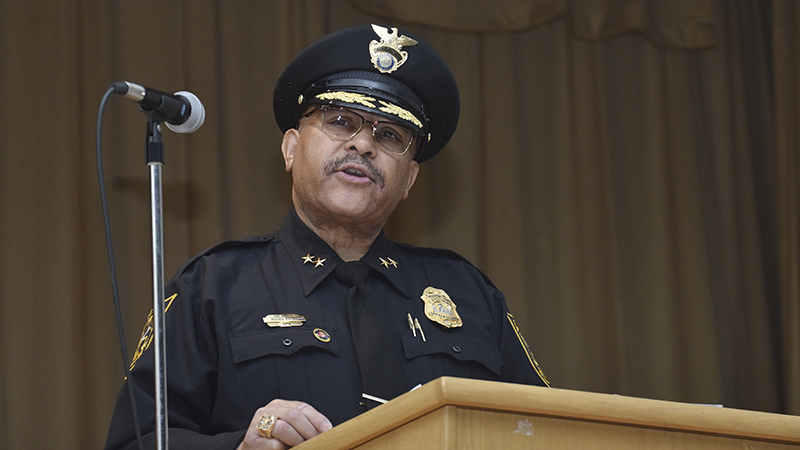 Ector, currently Dekalb County’s chief of staff of the office of the director of public safety, is second in command of the county’s police department, fire department and animal control. Ector was the first African American police officer at the HPD when he started his career in 1971.

Ector also served in the Georgia Bureau of Investigations, where he retired as the deputy assistant director, and as the first director of homeland security for the Dekalb County Police Department before returning to Hogansville to become the city’s police chief.

Ector spoke about the importance of giving back and asked what King would have thought about the racial division today.

“What would be his thoughts on the vast amount of crime that’s being committed every day in our inner cities?” Moses said. “We’ve forgotten the compassion and love of God and the love and compassion we should share with each other. I truly feel that if Dr. King was here, he would tell us that God has a plan for each of us. Dr. King would tell us that in God’s blueprint. He has let some of us feel our own pain and poverty — and I felt my pain and poverty growing up — so that we might understand the pain and suffering of others. Dr. King might even say that God knows that we are sick and tired as well as frustrated with conditions we feel our country is in.”

Moses said people can’t rush in to finish “God’s blueprint” because there’s no completion date, and God works on people a little at a time. Moses emphasized helping the truly needy, like people who have no housing and those with mental health issues.

“I feel that Dr. King would tell us that in God’s foundation of life, we should have character, ethics and morals, but most of all, we should be civil to each other,” Moses said.

Moses told the audience they can make a difference in someone’s life, and he said he tries to give back to people every day.

“It would have been easy to have given up on me,” Moses said. “My mother was 14 when she had me. I never knew my father. Had it not been for the faculty at West End High School, I could have been one of those people in jail. But, I had a family here that cared for me and loved me.”

After his speech, Hogansville City Council Member Theresa Strickland presented Moses with a key to the city.

The program also included singing from the St. Paul AME Choir and Eddie Robinson and a dance performance by God’s Grace Dancers from St. Mary UMC. Participant Sonya Kelley recited King’s “I Have a Dream” speech.

“I would like to thank everyone in the community for giving me the opportunity to be a servant to the community,” Dukes said.

City Council Member Marichal Price presented Robert Longshore, pastor of Lighthouse Tabernacle of Jesus Christ,with  a plaque in recognition of his work. Longshore had members of his church perform a song after he received the award.

“Like [Price] said, we have a non-denominational church, but when we [started], we didn’t have one,” Longshore said.

“As I always say, it’s not about me — it’s about the story,” Lowe said. “It’s about raising the recognition of what happened in our city.”