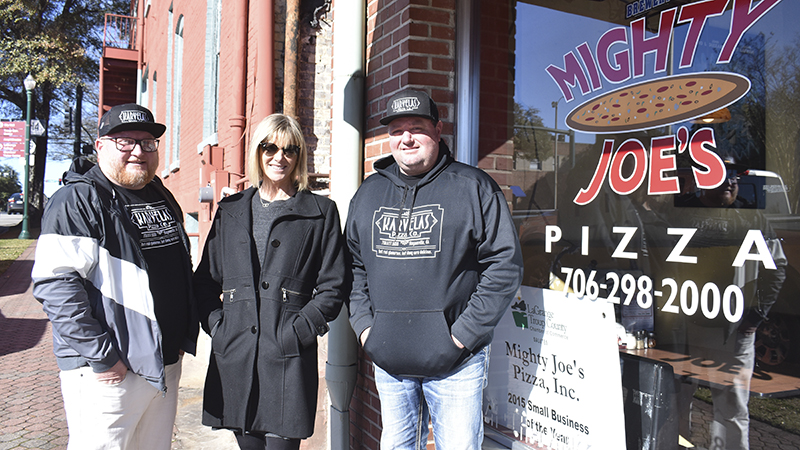 Mighty Joe’s Pizza will be closing its doors on March 15, and Karvelas Pizza Company will be taking over the space to add a second location.

Mighty Joe’s owner Laurie Cook said on Monday that she plans on retiring, and saw an opportunity to hand the business to Karvelas, which is based in Hogansville. Cook said she has planned on retiring as soon as she had grandchildren, and her first grandchild is due in July of this year.

“This has been a tough decision to make, but family is everything to me,” Cook said. “I’m almost 60 years old, and this was the best time to do it. The opportunity presented itself and I jumped on it. But it is bittersweet, this has been my baby for 11 and a half years. Now I’ve got a new baby on the way.”

Mighty Joe’s Pizza has been open since 2007. Cook said she and her ex-husband opened it after realizing there was no pizza place in the city, and he passed Lafayette Parkway, where the business is located, often for work.

Cook said a friend who owned another pizza place taught her the ropes, and the community has been inviting ever since they opened.

Joey Karvelas, co-owner of Karvelas Pizza Company, said he’s wanted to have a LaGrange location for the restaurant since he was a child.

“[When I was] twelve years old, I remember having a conversation with my dad about expanding into LaGrange and having our second location here, but also having [a location in] more of like a college town,” Karvelas said. “That’s always been a passion of mine.”

Cook said she has no reservations leaving her business to Karvelas.

“I don’t have any regrets, because I know their business ethics are like mine and they want to be successful and they’ll serve LaGrange,” Cook said. “I’ve met so many people here. You always want to leave your friends in good hands. I think they will definitely do that.”

Karvelas said the LaGrange location will be similar to the one in Hogansville, but the new location may look a little different. Karvelas Pizza co-owner Manny Karvelas said they want to keep a family feel to the restaurant.

“We do want to expand, but we are still a small family business,” Manny said. “We want to run it as such and have a connection with our customers and when they come in to feel like that’s what it is — like they’re home or part of the family and get a lot of attention from the staff, including us.”

Joey estimated they may be closed for month to move in equipment such as deep fryers. There is currently no exact date for when Karvelas will open in the new location.

Cook said she wanted to thank the store’s patrons and tell them that they can still go to Lafayette Parkway for good pizza.