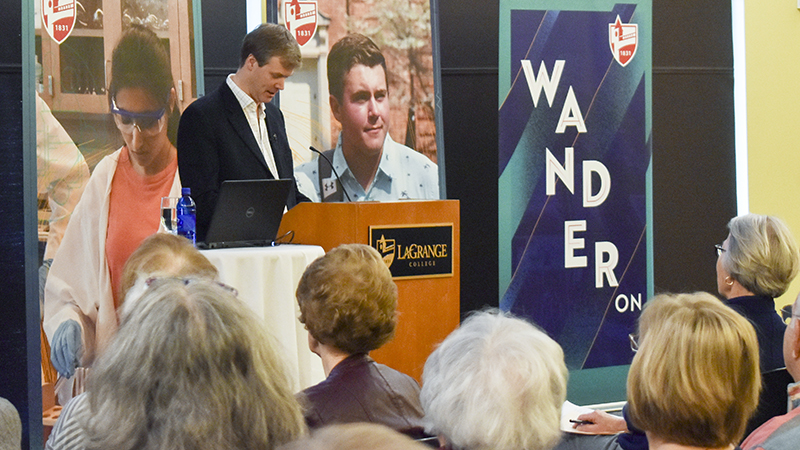 Duncan Sandys speaks to a crowd at LaGrange College on Monday, as part of the 3D Journeys series. (Alicia B. HIll | Daily News)

Scarcely a seat was free in the Dickson Assembly Room of LaGrange College on Monday, as Duncan Sandys, the great-grandson of Winston Churchill, spoke on his great-grandfather’s trips to Morocco.

Sandys brought humor to tales of the travels of his historic great-grandfather in Morocco and revealed a side of the British politician’s life that is rarely glimpsed between the pages of a history book. During the lecture, Sandys drew on news articles, biographies and family anecdotes to describe Churchill’s experiences in Morocco.

“[Morocco] became his favorite winter destination, particularly after the second World War, it was a place where he worked, and a place where he played as well,” Sandys said. “What I want to do this morning is to tell you a little bit about the story of his visits to Morocco through a lot of his own words.”

According to Sandys, Churchill visited Morocco six times, and he particularly enjoyed his time in Marrakesh, where he painted extensively.

“He first went [in 1935] because he wanted to explore the painting possibilities, as well as work on the biography of his great ancestor, John Churchill, who became the first duke of Marlborough,” Sandys said. “The second visit in 1943 was for the Casablanca Conference with Franklin Roosevelt. At the end of the year, he convalesced in Marrakesh and Catalonia, and his wife, Clementine joined him on that particular trip.”

Sandys spoke on Churchill’s insistence that Franklin D. Roosevelt visit Marrakesh following the famous Casablanca Conference, when D-Day was planned. He also discussed how Churchill spent time after WWII writing his memoirs and painting in Marrakesh.

“It really did become his favorite place,” Sandys said. “Part of the attraction, I think at the beginning for going to Morocco, was that he had spent a lot of time painting in the south of France. Of the more than 500 paintings that he did, approximately 300 of them were completed in the south of France, and I think maybe he ran out people to stay with and needed a place to go.”

A group of attendees from the 3D Journey series plans to visit Morocco later this year, and Sandys recommended that the group view the marketplace in Marrakesh that Churchill marveled over during his own journeys.

Sandys is a significant political figure in his own right. He was elected to the Westminster City Council in 1998 at the age of 24, and later became the city’s youngest Lord Mayor.

“We are delighted that he is here,” LaGrange College President Dan McAlexander said.

McAlexander said that the 3D Journeys series is part of the college’s effort to bring the education that students receive to the community.

“For the last eight years, LaGrange College has been very committed to making sure not only that we provide opportunity to our students, but affordability and access for them to discover the larger world around them,” McAlexander said.

McAlexander encouraged anyone interested in the 3D Journeys trip to Morocco to sign up, while there is still room in the group.

The next part in the 3D Journeys lecture series will take place on Feb. 25 at 10 a.m. in the Dickson Assembly Room of Turner Hall. Attendees should park in the Sunny Gables Alumni House parking lot.

Dr. Kevin Shirley, a professor of history at LaGrange College, will speak on Islam in Morocco at the February lecture titled, “Closer to thee than the Vein in your Neck.” A Dutch-treat lunch will be available in the Pitts Dining Hall following each session. For information phone (706) 880-8244 or email 3DJourneys@lagrange.edu.