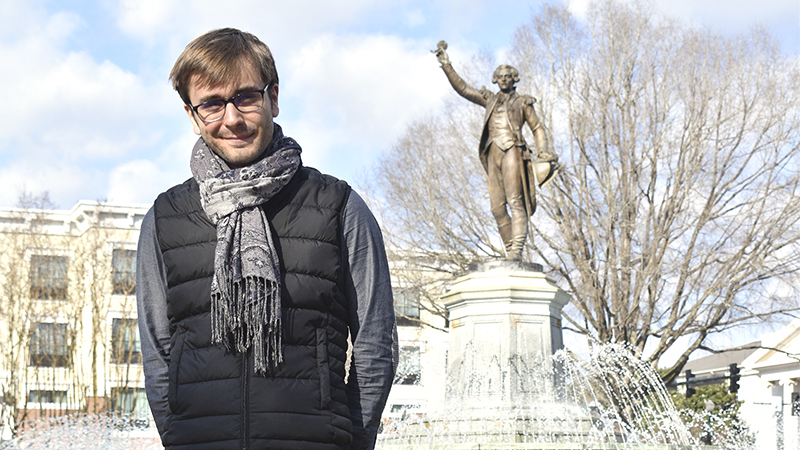 Julien Icher, Lafayette Trail manager, is touring through 24 states within a year, and made a stop in LaGrange this weekend. Above, Icher poses for a photo at Lafayette Square. --Gabrielle Jansen

For Lafayette Trail manager Julien Icher, the journey is more important than the destination.

Icher is mapping out the trails that American Revolutionary hero Marquis de Lafayette would have taken during his farewell tour of the United States from 1824-1825. During the weekend, Icher made a stop in LaGrange.

Icher started his journey in New Hampshire in July last year and is traveling through 24 states, noting which modern roadways Lafayette would have traveled and meeting with state legislators about recognizing the trail and the putting up markers to recognize it.

Lafayette visited Georgia in March 19-31 in 1825 when George Troup was the governor. Icher said during that time, the state was dealing with a treaty that sold Native American land that was not being enforced yet, and the state was in a bit of turmoil.

“I have traveled 24 states, and this is the only place where you can find this narrative,” Icher said. “Troup is the governor who accompanied Lafayette across Georgia.”

Icher said the Lafayette had visited the most southern point part of Troup County for two days. Even though he never visited LaGrange, which was named after Lafayette’s wife’s family estate in France, Icher said he still wanted to visit the city due to its connection.

“The trail doesn’t run through the city of LaGrange,” Icher said. “However, the name of the city is LaGrange. So, for obvious reasons, if there’s an interest of Lafayette in the state of Georgia, I’d like the City of LaGrange to be associated with it.”

In LaGrange, Icher connected with Lafayette Alliance president Richard Ingram since they’re both members of the American Friends of Lafayette. Icher and Ingram traveled to Atlanta on Monday to meet with the Consulate General of France and let him know of the trail.

“The Lafayette Trail Project is not an idea only,” Ingram said.

“It is an ideal. Julien hatched it, and implemented it. Julien is the epitome of a phrase new to our vocabulary: ‘To Lafayette,’ which means to have an idea, think it through and get it done.”

“In LaGrange, you have the statue of Lafayette here that’s a copy of the statue that is in Le Puy-en-Velay in France,” Icher said.

“That’s an obvious connection that very few cities have with General Lafayette.”

Originally from Carcassonne, France, Icher was studying living history museums in Colonial Williamsburg, Virginia in 2015. When he met the American Friends of Lafayette in Yorktown, Virginia, he was interested in how Americans view the historical figure and joined the group.

In 2016, Icher proposed the project idea to the Consulate General of France in Boston and was approved. Icher had already met with legislatures in Massachusetts, New Hampshire and North Carolina.

Icher said he plans on writing a book about his journey.

“I kind of feel like I’m forging the 21st century friendship between France and America,” Icher said.

Icher said he hasn’t found Lafayette statues in other places like the one in LaGrange. Icher emphasized the cockade that the statue holds represents Lafayette’s ideals. The cockade is red, blue and white, and the white at the center represents the monarchy and the other colors represent the people of France watching over the king.

“Here in LaGrange you have the statue and this message is here, except not necessarily a lot of people know about it,” Icher said. “I’m hoping that I can help [Ingram] to raise awareness not only about Lafayette but also about his ideals he stood for, which were the independence of this country, but just this cockade that he carries, just the symbol itself is really important.”

Icher’s next stops include Alabama, Louisiana, Mississippi and Tennessee before heading back to Washington, D.C.

“Julien is authentic,” Ingram said. “He loves America, and he is not hesitant to say so. Its prospects, he is quick to say, outweigh by far its blemishes.”