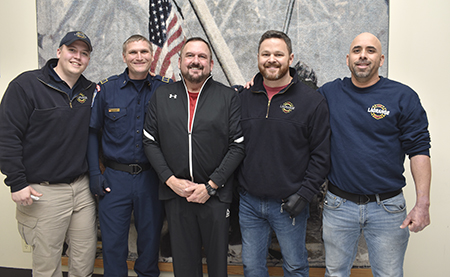 The LaGrange Fire Department received two morale boosts this week with the return of Lt. Josh Williams on Monday, and West Georgia Wrestling Entertainments’ donation on Thursday to Williams and three other firefighters injured last year.

Williams returned to work Monday morning and was greeted by a line of coworkers to welcome him back. Williams hugged every person in line before reporting to work. On light duty, he is assisting in training.

“It was hard to walk across that parking lot and see everybody, but it was a good, good feeling to know you’re supported that much,” Williams said.

Williams, Lt. Jonathan Williamson and firefighters Pete Trujillo and Jordan Avera received second and third degree burns while responding to a call on Labor Day. Avera returned to work on light duty on Oct. 8 and was back on the truck by Nov. 19.

“It’s good to get back to something a little bit normal. It was good for me emotionally, psychologically and physically,” Williams said.

LaGrange Fire Chief John Brant said it was a special moment when Williams returned and helped other members of the department heal.

“He’s an outstanding firefighter and lieutenant for the organization, so it was a special moment to see him come back and start putting his work career back in place,” Brant said. “It injured the department’s heart, and I think it’s starting to heal with time and seeing those guys starting to get back and [start] back to work.”

LaGrange Mayor Jim Thornton said in a statement that it’s wonderful to see that Williams is back at work.

“I am so incredibly proud of him and the other firefighters who were injured in last year’s fire,” Thornton said. “They went through hell, but they kept going, and they have come back strong. Their return to work is something for all LaGrange residents to celebrate.”

On Thursday, Jeff Tucker, director of promotions of the West Georgia Wrestling Entertainment, presented the four firefighters with $5,878.29. The WGWE held a benefit brawl for the LFD on Jan. 19 at ThreeLife Church. Tucker said that while the WGWE’s shows usually draw about 100 people, organizers had to bring out the church’s overflow seating for the benefit.

“[The audience wasn’t] there because of West Georgia Wrestling,” Tucker said. “They were there because we were there for y’all. I want y’all to know about the outpour and support and the people we talked to. It touched me deep to know how much they care.”

Brant thanked Tucker for the event and that they appreciate the donation.

“I hope it goes to whatever y’alls needs are, and I hope it strengthens you and helps you get through this,” Tucker said.

Williamson and Trujillo said the benefit brawl reminded them who exactly they’re working for.

“Not only financially, but emotionally (the donation helps),” Williamson said. “And it helps us to kind of push though our daily grind to get back to work.”

Williamson and Trujillo are still receiving treatment for their injuries before returning to work. Williamson said he is doing physical therapy three days a week and is having surgeries once a month.

“We’re getting there. Some days are better than others. I think I’ll be back to light duty in a month or so hopefully,” Williamson said. “I can’t wait to receive calls and get back to work, and give back what they’ve done for us.”

Trujillo, Williams, Williamson and Avera all thanked the community for its support.

“I’m ready to get back on light of duty to get some normalcy back in my life. It’s much needed,” Trujillo said. “[Saying thanks to the community is] an understatement.”