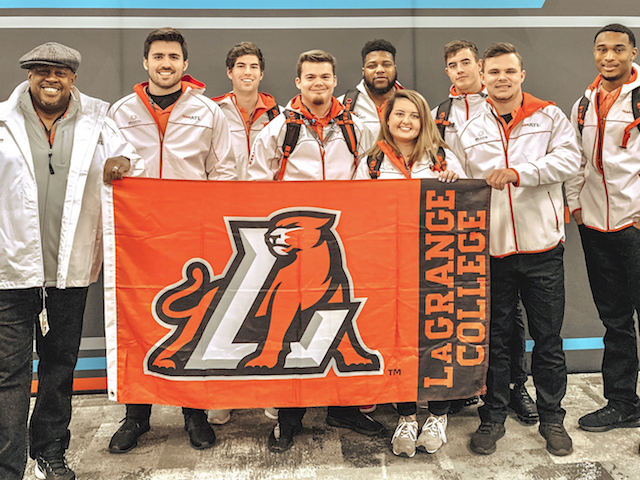 Members of the LaGrange College sports management program are preparing to assist with Super Bowl LIII this weekend in Atlanta. - Contributed

More than 30 students in the LaGrange College sports management program will have home field advantage volunteering at Super Bowl LIII at Mercedes Benz Stadium in Atlanta this weekend. The students regularly volunteer at Atlanta Falcons and Atlanta United games during their respective seasons, but this represents an opportunity to be a part of the biggest sporting event of the year.

Preston James IV, assistant professor of Sports Management and Law, said the students have been working around the stadium since Tuesday. The students have been volunteering at Super Bowl Live, the fan village at Centennial Olympic Park, the Super Bowl Experience and the interactive theme park at the Georgia World Congress Center.

“While they’re here, they’re meeting people in the industry, not just the fans,” James said. “They’re welcoming people to Atlanta from around the world, and everybody in the industry is here now.”

This is the second year in a row that LaGrange College students have volunteered at the Super Bowl. Seven students worked at the NFL House and directed fans and staff at U.S. Bank Stadium in Minneapolis, Minnesota, last year for Super Bowl LII.

LaGrange College senior Shamar Slappy said he had a good time greeting fans at Super Bowl Live and was trying to keep the smile on their faces in order to make Sunday the best possible day for them.

Thrailkill said they received their assignments at volunteer orientation on Friday.

Thrailkill also said working in Atlanta is much different than when she was in Minneapolis last year.

“[The NFL House] was like a quiet, bar-party-scene for all of [the players] to come and sign autographs, but it was very exclusive,” Thrailkill said.

“And then this year we’ve seen the volunteer aspect of it, where all of these people who live here and far away are coming and getting to experience the Super Bowl Live with DJs and all kinds of different things. Yesterday we got to see (Carolina Panthers tight end) Greg Olsen. It’s the same, but it’s very different being at Atlanta from Minnesota, based off the things we’ve gotten to do so far.”

LaGrange College senior Andrew Lewiski said the group will be working at private host parties before the game.

“The energy (of the crowd) has been the big thing,” Lewiski said. “It’s been exciting, kind of fast-paced. It’s been busy.”

Slappy said he will be working in ‘meet and greet’ on Sunday.

James said the college was able to bring more students this year because of the start of the college’s sports management club, which includes freshmen and sophomores before they’ve declared majors. James said one student, who is from England on a scholarship, was interviewed by a station in the United Kingdom and was asked about volunteering for the Super Bowl.

“I’m just happy that again we have the opportunity, and it’s in our hometown, so to speak,” James said.

James said the program is the only one in the area that is volunteering for the NFL.

“Our experience doing the Falcons and United games gives us a leg up on what’s going on,” James said. “Now, I’m explaining stuff to the other programs about the area and what’s going on. So, we’re able to help out that way too.”

Both Lewiski and Slappy said it has been great meeting other people from around the world.

“I got to meet some people from other schools,” Lewiski said. “We’ve met some guys from London doing some reporting here.”

Slappy said so far, the most memorable thing about volunteering has been meeting people through James.

“I’ve made a lot of connections the past few days,” Slappy said. “I really owe a lot to Dr. James.”