LaGrange College brings in more than $70 million through campaign 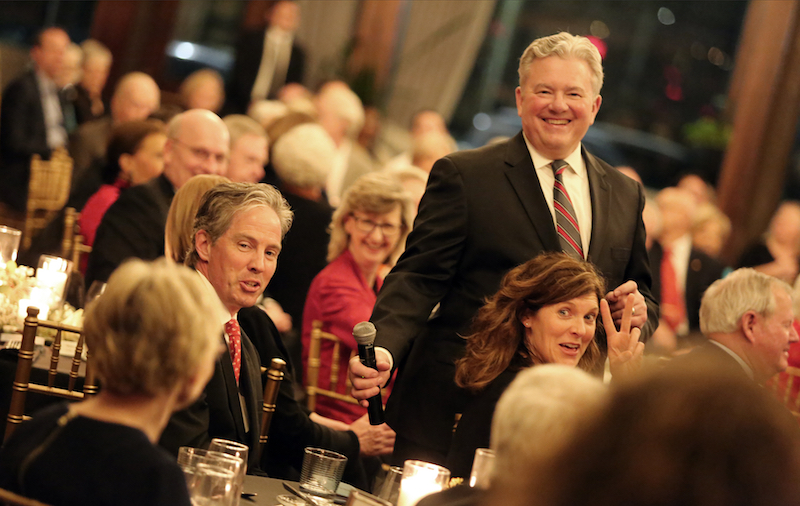 LaGrange College celebrated the culmination of its five-year fundraising campaign, From Promise to Prominence, on Thursday night with some fanfare and crowd involvement, as President Dan McAlexander revealed that $71,922,967 had been raised over the course of the campaign. The goal for the campaign had been set at $50 million.

Donors, board members, community leaders and college personnel gathered at the Del’avant Thursday night for an evening of celebration. Those directly involved with the campaign spoke to the accomplishment and success of the effort, a film was shown highlighting current members of the LaGrange College student body who thanked donors for their contributions and McAlexander ended the evening by slowly revealing the campaign’s overall number by involving members of the audience.

“This really has been a transformational event,” said Rebecca Nicks, LaGrange College’s vice president of external relations. “Each and every one of you are changing the lives of current and future students. We’re here to celebrate more than just the amount of money that was raised, we’re also celebrating the achievement that the campaign has had. Really every facet of the student experience has been touched.”

The board of trustees approved the From Promise to Prominence campaign in 2013. Soon thereafter the ribbon was cut on the new nursing/music building, which had previously been home to the West Side School, construction on a new fraternity court began and additional study abroad opportunities became available. A focus was placed on fortifying the LaGrange College fund, which allows for financial aid to be provided to students.

One of the primary projects undertaken during the campaign was the construction and unveiling of the new science facility, the Ida Callaway Hudson Lab Sciences building. The new facility is a comprehensive math and science complex that allows students access to first-rate laboratory and collaboration settings.

“When I first got here, our science facilities were just okay,” one student said in the video. “But, we asked for improvements and people stepped up.”

After the appreciative film, McAlexander took the stage to make the big reveal, first expressing his thanks for those who made the donors who participated in the campaign.

“What you all did to make this campaign a success has been so incredibly moving to each and every one of us who works on this college campus,” McAlexander said. “Nearly 5,000 people contributed to the campaign in any amount. That is so confidence-giving to those of us who look to fulfill the promise of this institution.”

The LaGrange College marching band then appeared, playing the school’s fight song to preview the big reveal. Starting with the smallest digit of the total amount raised during the campaign, McAlexander worked the crowd, asking for guesses for each number of the total, digit by digit, until the final $71,922,967 was revealed.