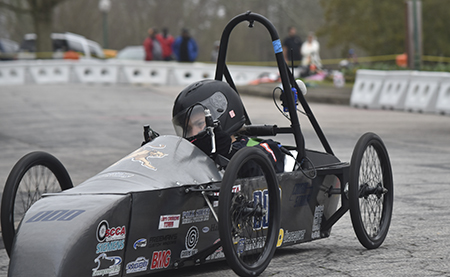 On Friday, roughly 300 students were awarded scholarships to LaGrange College during the parent reception for the first annual DiversePower Grand Prix.

The Greenpower USA program race featured middle school and high school students from across the country racing electric cars that they built. Long Cane Middle School’s team was among the participants with two cars in the race. However, parents and students had another reason to celebrate even before the first race began.

“Because of Dr. [Dan] McAlexander’s leadership, every student both middle and high school that is here at this race today gets a $2,500 scholarship to LaGrange College,” LCMS Principal Chip Giles said. “That means we are handing out $750,000 in scholarships tonight because you are here as part of this valuable program.”

GreenpowerUSA was founded in May 2014, and now includes more than 150 teams in 15 states across the county. It has been lauded as a fun opportunity for students to participate in hands-on science, technology, engineering and mathematics (or STEM). Due to the growth of STEM careers, many schools have placed an increased focus on science and engineering, including LaGrange College, who unveiled the Ida Callaway Hudson Lab Sciences building in February 2017.

“[LaGrange College] is a college that is very devoted to the STEM programs that all your young people are studying in this particular venue with the race,” LaGrange College President Dan said. “We just invested $21 million in STEM across the last 3 years.”

McAlexander said colleges like LaGrange College benefit from the commitment of middle school and high school students to STEM programs because they carry that interest into their college years. Those benefits could potentially last long past student years though, according to LaGrange College Alum and LaGrange Mayor Jim Thornton.

“What you are doing as parents, encouraging your children to participate in STEM programs like GreenPower is you are putting them on a pathway to a great career because it is in high demand in this country,” Thornton said. “If we are going to be a manufacturing center — not just in LaGrange but throughout the United Sates — we’ve got to have our children interested in science, technology, engineering and mathematics. Those are going to be the disciplines that the jobs of the future are built upon.”

DiversePower representatives were also on hand to thank the parents for their commitment in driving — in some cases across the country — to LaGrange to watch the race and encourage students in STEM programs.

“Diverse is extremely proud to be involved in this project,” said Gordon Cone, president of the DiversePower Foundation.

Over the weekend, Long Cane Middle School cars won the pit crew challenge, took second for presentation, won the middle school endurance race overall and won first and second place in middle school modified overall. The race was the first of its kind in Georgia.

WEST POINT — Two Lanett men have been arrested and charged with criminal attempted murder after a 15-year-old female was... read more