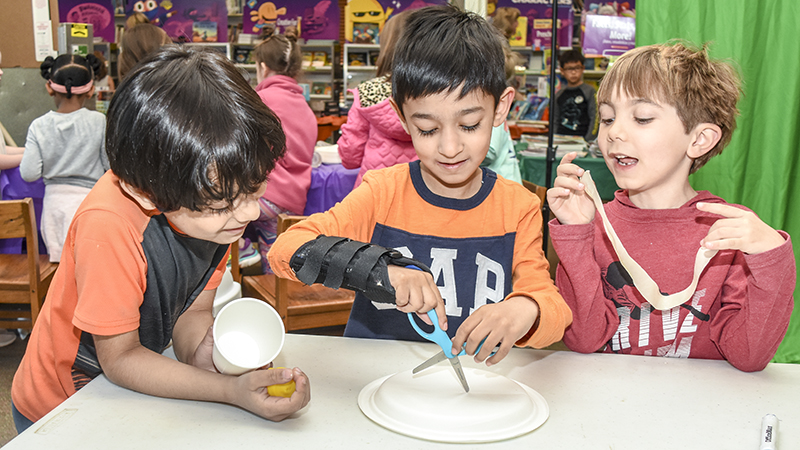 The Kennesaw State iTeach Maker Bus made a stop at LaGrange Academy on Tuesday morning, giving students a chance to get out of the classroom and learn through various activities.

The bus is through KSU’s Bagwell College of Education and is a 30-foot mobile classroom and laboratory that travels to schools with a focus on STEAM (science, technology, engineering, arts, mathematics) activities.

“This is the first time we’ve done something like this, which is sort of like a flipped field trip,” said LaGrange Academy instructor Tiffany Ammerman. “Instead of us going to them, they came to us.”

Students in grades kindergarten through fifth grade had a chance to step onto the Maker Bus and go through three different stations. Most of the activities were in the school library, partly due to the cold temperatures outside.

“They are doing construction, engineering, videography, building and using a small robot,” Ammerman said. “They are really getting some in-depth STEAM activities.”

Students visited the library in groups by grade throughout the day, with younger students going first. As the students at each station got older, the projects they were working on became more complex.

For instance, the chariot station used a Sphero — a small, round robot, to move around a duck or dinosaur toy. As the groups got older, the focus moved more to the actual robot.

“Typically, with the younger students, like kindergarten to second grade, we focus on the design of moving the duck or dinosaur, which is being moved in the action,” said Philip Wagener, an education technology specialist with KSU’s iTeach Department.

“However, as we get to the older groups, we transition over to the Sphero, where we focus more on the coding aspect of the Sphero to get it to move.”

“I think sometimes that passion to be excited about learning is extinguished with the curriculum and a lot of the standards teachers have to focus on,” Wagener said. “This is a great opportunity, not only for students to showcase their learning in an alternative way, but also to show teachers a method outside of the traditional book and worksheet that we traditionally see. This accomplishes the exact same task in a new and innovative way.”

The iTeach Maker Bus was unveiled in April 2018 and includes a laser cutter, 3D printer, a drone, circuit kits and WiFi.

For more on the bus, visit Kennesaw.edu.