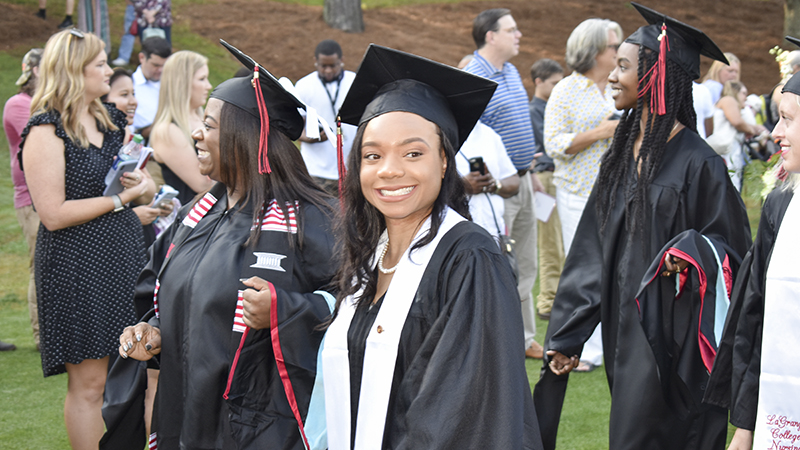 The 229 members of the 2019 LaGrange College graduating class filed onto the Residential Quad in the middle of campus Saturday morning, surrounded by friends and family, to receive their degrees and bring an end to their undergraduate studies.

The weather was warm and the quad was full for the ceremony, which saw multiple students receive awards and an honorary degree bestowed on commencement speaker and LaGrange Police Department Chief Lou Dekmar.

“Graduates, each of you has worked, sacrificed and persevered to get to this point,” LaGrange College President Dan McAlexander said in his address. “Whatever unique challenges you faced along the way, here you are today, ready to receive your degrees with all the hard work, knowledge, experience and character that they represent. Please know that your alma mater is proud of you.”

In acknowledging the accomplishments of this particular senior class, McAlexander made sure to mention the LaGrange College baseball team’s five seniors, who were unable to attend the ceremony as they were playing in the 2019 Division III Baseball Championship Tournament in Birmingham.

Mary Grace Wickline Boyd and Chad Owen Vickery presented the graduating class’ senior gift to McAlexander, a check in the amount of $2,176 to be contributed to the college’s LC fund. Caitlyn Jeanelle Deal was named the Waights G. Henry, Jr. Leadership Award Recipient as well, and addressed her classmates, lauding them for their compassion.

“I’ve learned a number of things here during my time on the hill, but one thing has stuck out the most, to be compassionate,” said Deal. “The students of LaGrange College are compassionate.”

LPD Chief Dekmar served as the commencement speaker for the class and was also presented with an honorary doctorate from the college prior to his address.

Dekmar spoke to the graduates, discussing his own experiences in the realm of policing and the need for community action.

He discussed the Austin Callaway lynching of 1940, the apology he made on behalf of the police department in 2017 and the role every individual must play in addressing the past as an avenue toward a better future.

“There is no job or career field dedicated to addressing past harms,” Dekmar said in his address. “This must be done by people that care from all walks of life, one community at a time. It requires people who sometimes share little in common who are still willing to work together to improve the future of their community.”

Dekmar ended the graduation with a charge from the author Dr. Seuss.

“Unless someone like you cares a whole awful lot, nothing is going to get better, it’s not,” Dekmar concluded.