Nichols moving on: ‘I think this whole community is on the verge of prominence’ 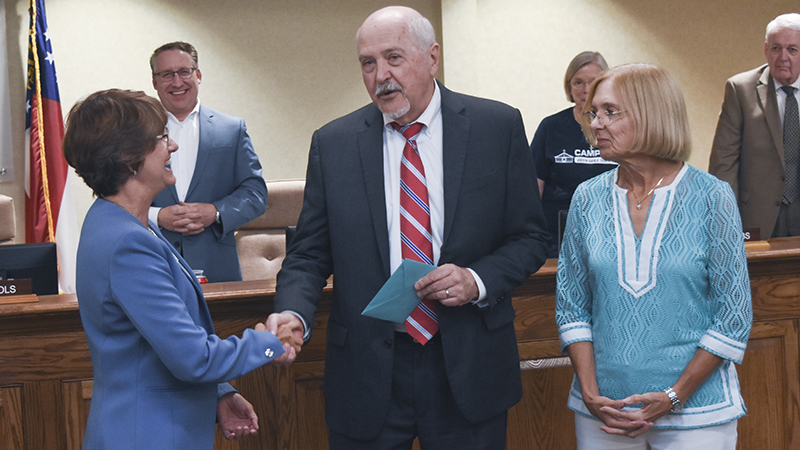 When Dr. Roy Nichols first took over as interim superintendent in August, he walked back into a familiar place.

Not only had Nichols served as Troup County Schools Superintendent from 1999-2004, but even his office space was the same — all the way down to the furniture. Inside his desk, he even found a hand-written list of phone numbers, which he had written at some point in his previous tenure.

Nichols had been retired since 2011, when he left Mobile City Schools, but he was coaxed out of retirement to guide TCSS as the school system went through a superintendent search. Nichols said he was hoping he’d be on the job three to six months, but his tenure ended up being 11 months.

“I certainly understand [the timeline],” Nichols said. “They picked the very best person on the market for the job, and he just couldn’t make it until July 1, but it grew to be a little more time than I had intended to give it initially.”

Nichols participated in his final school board meeting Thursday night, assuming there aren’t any issues that require action before Dr. Brian Shumate takes over as superintendent on July 1. Nichols was given a card and thanked by the entire board for all of his work.

“It was easy to just plug right in and fit in because we have a lot of great people and a wonderful school board,” Nichols said at Thursday’s board meeting. “I really enjoyed working with all of them, very professional people.”

Nichols said it was interesting to compare his first stop at TCSS, when he served as superintendent for five years, and this one.

“Then, when I got in the door this time, they were going out the door as retirees. That was a little weird.”

The school system had added new positions and had hired plenty of new people that Nichols had never worked with before.

“I had to learn their personalities and likes and dislikes and they had to learn mine. I really enjoyed my time here,” Nichols said. “I looked forward to getting up on Monday mornings and coming to work.”

Nichols said he didn’t want to make any wholesale changes that might not go with Shumate’s philosophy.

He took over as interim on the same day TCSS accepted Dr. Cole Pugh’s resignation. Shumate was officially hired as superintendent in February, but he had to move from Oregon and is starting next month.

“He’s been calling someone on the senior staff almost daily,” Nichols said of Shumate. “When we did the final interview for the Gardner Newman principalship and the Long Cane Middle School principalship, it was a joint interview over the internet.”

Since he was hired, Nichols said the final decisions have been Shumate’s to make. Nichols has given his opinion, but he has deferred to Shumate, since he will be leading the school system for years to come.

“I knew he was going to be here, so the final decision was his anyways. It would be best if he would be the one that made the decision,” Nichols said. “I just gave him my input. I saw my job as preparing the system for him, because he is the one that has to do it long-term. I’m just a temporary fill-in, so I approached the budget building process that way and the personnel process that way.”

Nichols said when he leaves, he will leave Shumate a letter, just like the President of the United States does when his time in office ends.

“Right now, I’ve got 14 different items. I’ll probably have 20 by the time I’m finished, just introducing him to people and to issues that are peculiar to this school system,” Nichols said. “He’s never worked in Georgia before, so I found the most important thing when I first took a job in Georgia was figuring out how we earn our money from the state and how to read that allotment sheet that the state gives us.”

Nichols said indications are that test scores are up, though nothing official has been released from the state. Graduation rates are also expected to rise again this year.

“I think this whole community is on the verge of prominence. One of the things I had heard was, ‘if the school system was a little better than more people would want to live here, and the community would really prosper,’” Nichols said. “I believe there’s some truth in that, and I believe the school system is now on a proper trajectory. Under Brian’s leadership, in five years, I’m confident we are going to say, ‘Look at this great school system we have.’”

Nichols, 75, said he and his wife Fran plan to play a lot of golf in retirement. The couple has been married 53 years this year and plans to take a trip across country and to spend a lot of time with grandchildren.

“I intend to spend a lot of time with them, and my wife and I have this fantasy to take a trip to the Northwest,” Nichols said. “We’ve never really been out to Washington, Oregon, Idaho, Wyoming, North and South Dakota. I’d like to go see that.”