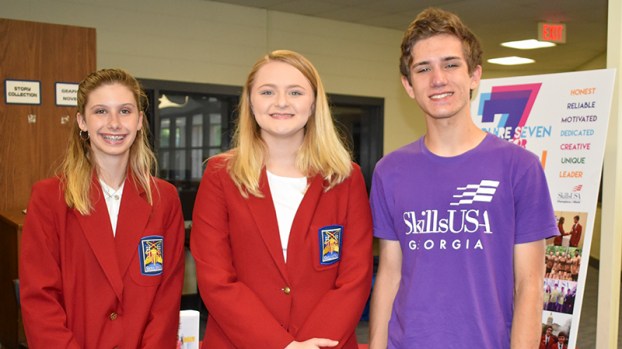 Throughout Troup County, students and teachers are preparing to go back to school, but on Tuesday, the Troup High Alumni Association recognized students for how they spent their summer.

“SkillsUSA is a student led organization that builds leadership in these kids, and it is an opportunity for these guys to build teamwork,” said Amy Hicks, the graphics teacher and SkillsUSA advisor at Troup High School. “They build personal skills in themselves, and they also are learning hands-on job ready skills.”

At the conference, Devon Cushing, a graphic design and production student at Troup High School, was elected to serve as a national officer for SkillsUSA.

“This past June, we had the opportunity to attend our national leadership and skills conference,” Cushing said. “It was a lot of fun, and we grew as leaders, and we made lifelong friends throughout the process.”

Cushing was elected through a formal election process in the SkillsUSA House of Delegates, but winning that election is only the beginning.

“At this event, I was able to run for national officer and get it,” Cushing said. “Throughout the year, I’ll have the opportunity to go to Washington, D.C., and in the next few days, I’ll be in Lincoln, Nebraska. At these events, we’ll be hosting our Washington Leadership Training Institute, where we learn more about the framework… of personal, workplace and technical skills.”

As a national officer, Cushing will represent the national organization at various events.

“Devon believes strongly that CTE prepares students for the future,” said Tim Lawrence, executive director of SkillsUSA in a press release. “I look forward to working with him this year.”

Troup High alumni congratulated Cushing and other Troup High students who represented THS at the SkillsUSA completion for their hard work at the conference and throughout the year. Troup County Schools Superintendent Brian Shumate also praised the students.

“I want to congratulate these three young people. You have a national officer now at SkillsUSA,” Shumate said. “The other two ladies got to compete. They went to my own hometown of Louisville, Kentucky, to compete this summer, and it is a big deal. I want to thank you for your leadership.”

Shumate said that SkillsUSA is an example of something that the school system is doing a good job on, and he said that he hopes to see more similar programs in Troup County Schools in the future.

“SkillsUSA is exactly what I believe in in schools,” Shumate said. “Every kid has to find their place — whether it is the band or the graphic arts program — and they stay in these programs with likeminded kids and caring adults and things to look forward to. Those competitions are important, and these guys will all graduate on time.”

Hicks said that 98 percent of students who are active in a career technical student organization graduate on time, and 91 percent of active members who compete go on to receive post-secondary training. She emphasized that the program is designed to prepare students for the working world.

“They build personal skills, and those are the leadership skills that they build themselves by doing all these activities,” Hicks said. “Then, the base of the triangle are the workplace skills, and that is where they learn how to work together as a team.”

Hicks said that Troup High School will also be participating in a program where 300 students will receive career essentials training during the school year.

“One of the nice things that we have at Troup High School this upcoming school year is … we have been chosen — one of five schools in the nation — to receive a grant where 300 of our students here are going to go through career essentials training,” Hicks said. “Devon has already gone through the first level of career essentials. He is working through the second level right now, but all of our students are going to have the opportunity to get that credential.”

Hicks said the credential is industry backed, and those with the credential will receive preferred applicant status when applying for a job in the industry. The credential program is expected to be rolled out to a wider audience in the future.

The Troup County Sheriff’s Office is currently looking for leads on a group who reportedly used a stolen truck to... read more