Students accept scholarships before heading off to college 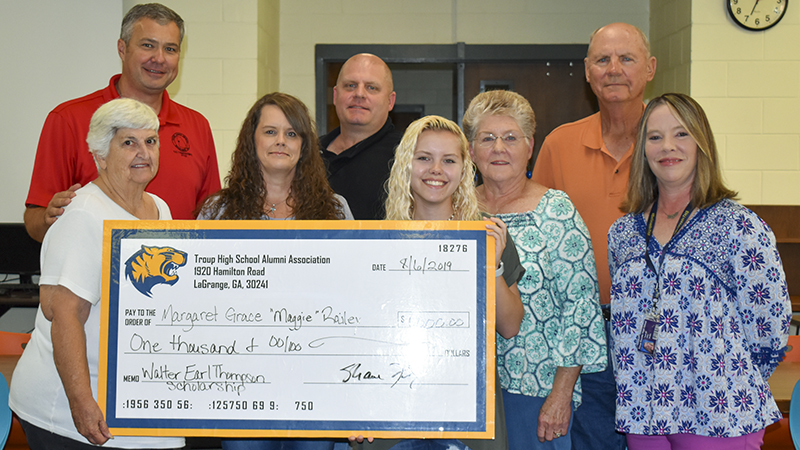 Margaret Grace Railey and Harrison Lawson are getting ready to begin their first year in college after graduating from Troup High School, but on Tuesday, they received a reminder of the support that they have from the community in their future endeavors.

On Tuesday, the Troup High Alumni Association awarded Railey and Lawson with the Walter Earl Thompson Scholarship. The awards were initially announced in May, but the event on Tuesday gave alumni the chance to wish the students good luck in the upcoming school year. Thompson was a Troup High alumnus.

“My favorite part of every year is giving out our Walter Earl Thompson Scholarship awards,” said Shane Frailey, president of the Troup High Alumni Association.

According to Frailey, the scholarship is awarded based on outstanding performance and dedication, qualities that the two students with big plans communicated to the scholarship panel through their applications.

“I’m going to Georgia College at Milledgeville next week, and I’m going to major in nursing with the hopes of getting a job in nursing,” Railey said.

Lawson was unable to attend the ceremony, but his mother, Shannon Lawson, attended on his behalf.

“He plans to attend Dartmouth. He’ll be heading there Sept. 5,” Shannon Lawson said. “He is super excited about Dartmouth. They have some really neat degrees in the history department, some ancient history degrees. … We are just very excited. This family is very proud of him.”

The Walter Earl Thompson Scholarship is funded through donations and alumni organized fundraisers including the annual Sockhops concert in February. In addition to the scholarship, the Troup High Alumni also provides funding for a variety of the school’s needs including paying for the digital sign in front of the school, an annual lunch for teachers, feeding the band before a game, providing funding assistance for the SkillsUSA team and purchasing equipment for the school.