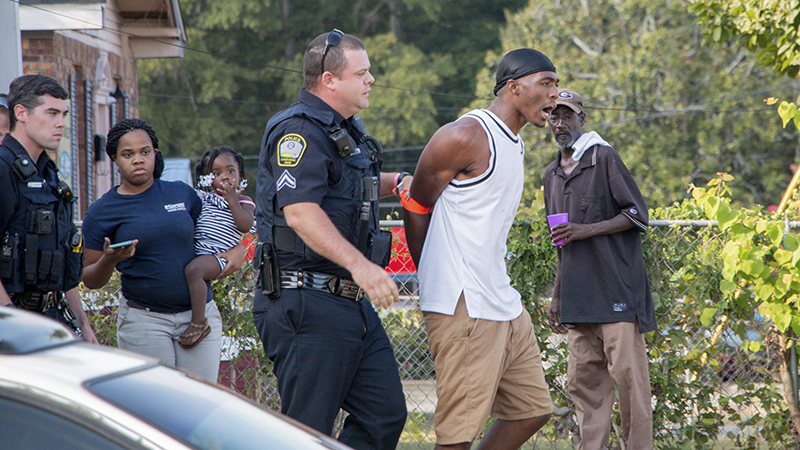 Above, Fredrick Ransom is escorted to a LaGrange Police squad car after being arrested Thursday afternoon. (Jenna Oden | Daily News)

Officers with the LaGrange Police Department were involved in a foot chase Thursday afternoon, after observing a wanted person on the 500 block of South Greenwood Street.

According to Sgt. Clayton Bryant, 22-year-old Fredrick Ransom took off running after being confronted by officers.

“He ran around all over the block and around, and then into the house and shut the door in the officer’s face,” Bryant said. “Knowing that he had a warrant they [officers] had some conversation with him through the window, and he eventually refused to come out.”

Officers breached the door, entered the residence and proceeded to arrest Ransom. According to Bryant, Ransom had an active probation violation warrant.

Ransom was booked and charged with simple battery of a police officer, obstruction of an officer and a felony probation violation.

During the arrest of Ransom, two other persons were arrested for interfering with the situation.

During the arrest of Ransom, two other persons were arrested for interfering with the situation.

Prince Ann Ransom, 58, and Lonita Ransom, 44, were charged both charged for disorderly conduct.