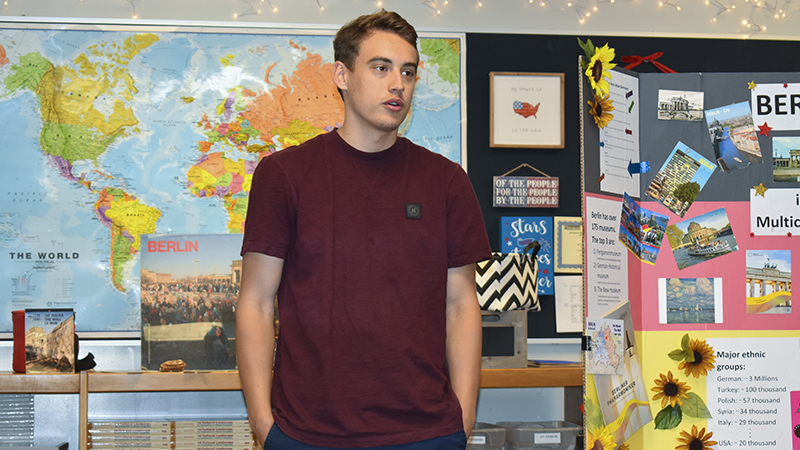 On Tuesday morning, Tamino Schoffer returned to the halls of LaGrange High School to talk about his experiences as a foreign exchange student at the school and the differences between Germany and the United States.

During Tiffany George’s second period class, Schoffer took questions from students on topics comparing everything from history to the economy of his home country and the U.S., where he has visited every year since his time as a foreign exchange student. George and Schoffer both encouraged students to consider studying abroad.

“If they have any intentions of [doing] anything internationally — or they just want to be ahead of the rest — traveling, going and studying abroad is a good way to do that,” George said. “Learning another language is a perfect way to do that, so anything you can do to advance yourself a little bit more than the other person, that is going to give you a step up.”

George said that she hopes hearing from Schoffer gave students a chance to learn about another culture.

“The exposure is amazing. I think they need it, especially in today’s culture,” George said. “Just explaining a different culture [is important]. … People do things differently. Schools look different. The emphasis on what is important in life is different in different places you go.”

However, the foreign exchange students themselves aren’t the only ones who get something out of the program.

“He was probably the best thing that we never planned on doing,” said Shannon Lester, part of Schoffer’s host family. “I would say that the biggest thing that he did for our family is we took trips in our own country that we probably never would have taken the time to go do. We took him to Washington D.C.”

“I think it has been incredible the friendships he has made and the example he has been of his own country,” Lester said.

“We’ve developed a good relationship with his family, and I have his brother for seven months this year. I never would have done that if I hadn’t had Tamino.”