Veteran of the Year 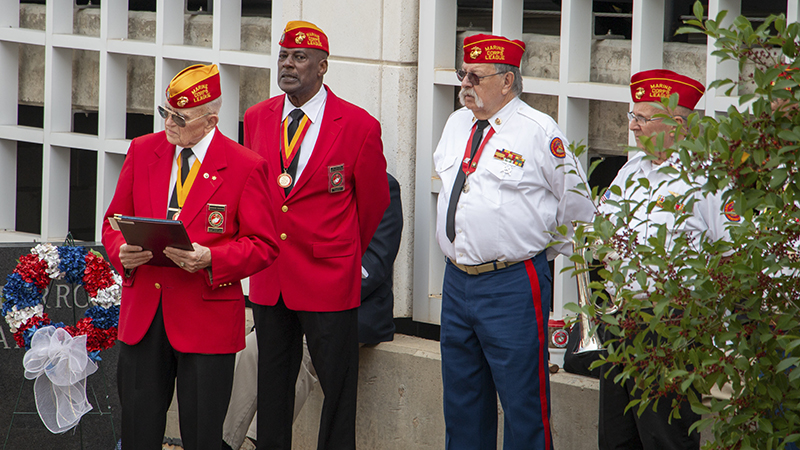 Bernard Bledsoe has been giving back to the community for years, and on Monday, he recognized as the West Georgia Veterans Council’s Veteran of the Year.

Bledsoe is a longtime West Georgia Veterans Council member, serves as the coordinator for Toys for Tots,  was a past commandment of the Marine Corps League and is a former Marine veteran.

“Everybody knows of him,” said Al Yates, department commandment, Department of Georgia, Marine Corps League. “He has a hand with everything that goes on with every occasion in the county that involves veterans.”

The announcement was made during the annual Veterans Day services at the Troup County Veterans Memorial. Bledsoe was chosen for his dedication to the community and veterans services.

“I guess I was a pain in the butt enough, so this year it came up to be me,” Bledsoe said. “I was deeply honored to tell you the truth.”

For nearly 20 years the council and Bledsoe have been putting on the Veterans Day service at the Troup County Veterans Memorial.

“I’m longest serving member from that initial group (Marine Corps League) in 2000 that is still alive and active with the veterans’ council,” Bledsoe said. “I enjoy and get a lot of out it.”

“There are thousands of men and women from the armed forces who have served to make my and your life easier,” Bagley said. “They put service before themselves in a bond of arms of brothers and sisters for the main goal to serve and protect our country.”

Cadet Col. Bagley honored his great grandfather, uncle and other family members who served in all branches of the military.

“Today, we have assembled together to express our profound gratitude for the sacrifices and contributions you all have made, on the battlefield, at home and around the world,” Cameron said. “Many would describe a veteran as someone who have served in our nations armed forces, but to me, a veteran means so much more.”

Cameron said that a veteran is someone who has fought a fight of goodwill and with the nation’s best interests at heart.

“Each of you have sown the seeds that we still gratefully have privileges of reaching,” Cameron said. “I promise, on behalf of the Callaway High School Air Force Junior Reserve Officer Training Corps, that we know that we may never be able to serve just as you have, but we will try our best.”