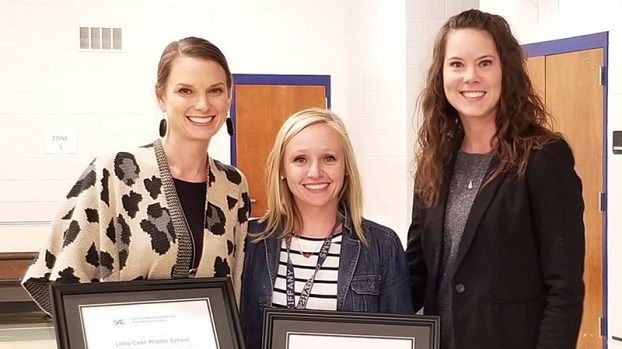 When the Long Cane Middle School (LCMS) staff was called into the cafeteria after school before Thanksgiving break, they were not sure what they were celebrating.

According to a press release from Troup County School System, as the teachers piled into the space decorated with flowers, snacks and a cake, they knew it was something special. Then, LCMS Principal Whitney Glisson, introduced a guest to share the details of the gathering.

Amy Smith, manager of Pre-College Education with SAE, was on hand to congratulate LCMS educator Tiffany Graham as the recipient of the Gary Dickinson Award.

“This is an award for an educator, or a team of teachers, who have made creative and exemplary uses of the AWIM program and other STEM programs,” Smith said in the press release. “There are numerous nominations every year, and Tiffany was the one that stood out. Thanks to Kia [Motors Manufacturing Georgia] who makes AWIM happen through their funding support and volunteer support.”

When Graham was called up and handed a display of flowers, Smith also presented her with a $2,000 honorarium for her outstanding work in helping students learn about science, technology, engineering and math through the A World in Motion program that provides hands-on learning to students in elementary and middle school.

“I am so honored to have received this award,” Graham said in the press release.

“I love the AWIM program and what it offers our students. Not only does it mean a great deal that Devon Lassetter thought enough of me to nominate me, but to have actually received the award is crazy. So exciting and such an honor. I am so grateful.”

In addition to the teacher honorarium, the school also received a $2,000 gift from SAE.

Recently, the Georgia Department of Education released its list of 2019-2020 Distinguished and Reward Schools, according to a press release... read more