The LaGrange Police Department arrested a LaGrange man on Friday following allegations of an attempted rape of a 17-year-old girl.

Juan Samayoa, 31, was charged with felony rape-strong arm, and taken to Troup County Jail, where he was held without bond. 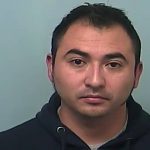 The LPD initiated the investigation into the reported rape attempt at 11 a.m. on Friday, and according to a press release from LPD, an investigation revealed that Samayoa had unsuccessfully attempted to force the teen to engage in sexual acts against her will.

The teen did not report any major injuries, according to LPD.