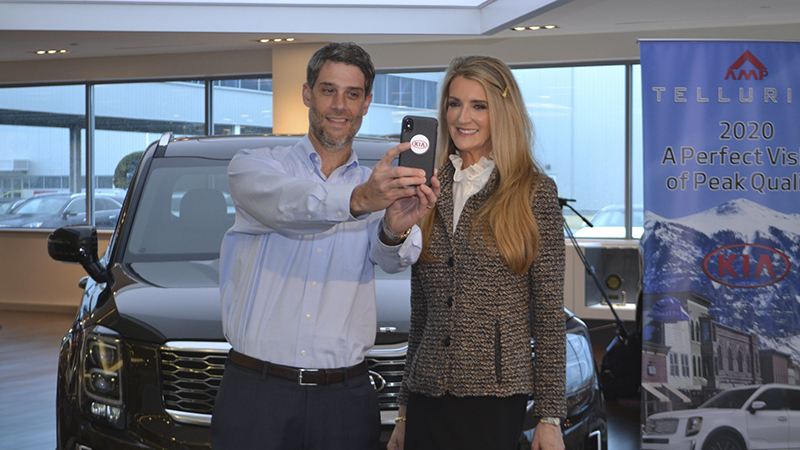 In just a few days, Kelly Loeffler will be sworn in officially as Georgia’s US senator. But Friday, ahead of that, she visited West Point and toured Kia Motors Manufacturing Georgia.

Loeffler will take over the seat that was vacated by Johnny Isakson.

Isakson stepped down due to health challenges.

Loeffler describes herself as a pro-life, pro-second amendment, pro wall conservative who is ready to go to work for all Georgians.

Loeffler took a tour of the Kia assembly plant Friday morning and said she was impressed.

“Well, I have to say this was a really impressive tour, not just the innovation and technology but the people and the culture,” Loeffler said.

Loeffler said her goal is to get around the state before she is sworn in to meet people and hear what’s important in their lives and to understand how she can play a role when she gets to Washington.

Many people throughout the state are not familiar with Loeffler, who grew up in rural Illinois where she worked on her father’s corn and soybean farm. That upbringing will certainly resonate with much of rural Georgia.

“I’m stepping out of the private sector much like President Trump did because we want to protect freedom and defend our way of life and fight socialism and make sure that America and the American dream survive,” Loeffler said.

In the private sector, Loeffler is CEO of Bakkt, a new cryptocurrency trading platform, as well as co-owner of the Atlanta Dream WNBA franchise.

She was asked how she would ensure areas like Troup County continue to grow in the manufacturing sector.

“I’ve certainly seen today first-hand how important it is that we support manufacturing in our country and that we understand the impacts of regulation and trade,” Loeffler said.

She went on to say she believes what President Trump is doing with trade is very important and that every aspect of it and how it can affect American industry and jobs.

Loeffler has been humbled by the outpouring of support from her future colleagues in the Senate, from Leader McConnell through Senator Perdue.

Loeffler wants all Georgians to know she is a proud patriot who is both honored and humbled to serve this country.

As for what we can expect from her once she hits the ground running, she is going to learn about what is needed for Georgia to grow from an economic perspective.

“This region in the Southeast is increasing in terms of importance in our country,” she said. “…Employment’s at record highs, unemployment is at multi-year lows.”