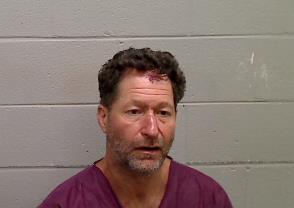 A Pine Mountain homeowner fought back Friday night after a man illegally entered his home, wielding a dangerous object.

The Harris County Sheriff’s Office arrested 49-year-old Christopher Nelson and charged him with fleeing from the scene, assaulting an officer, entering a home illegally and interfering with government property.

According to HCSO Sheriff Mike Jolley, after Nelson wrecked his 2001 Chevrolet Silverado into a ditch, he was observed running from the wreck into the woods.

“He ran into a nearby home, wielding something to be used as a weapon,” Jolley said. “There were children inside the home at the time.”

According to the incident report, Britt Bonner was inside his home with his five children all under the age of 12 when Nelson entered the residence.

Bonner told police that he and the children were all in the living room when Nelson made entry to his residence through the front door holding a 6-foot “T-Post.”

Bonner told deputies that Nelson began to yell that he needed a phone for help, and started swinging the post in the air. He told officers that he rushed Nelson, forcing him to drop the post out of his hand.

Bonner then struck Nelson several times with a closed empty hand and pushed Nelson back out of his front door.

“The suspect was located by the deputy, who exited his vehicle … he told him to get on his knees and lay face down on the ground,” Jolley said. “The suspects complied and was handcuffed. The suspect began to move frantically on the ground and began to swing his arms in an attempt to strike the deputy.”

Jolley said that Nelson was high on an unidentified illegal drug at the time. According to the report, Nelson kicked the rear window of the patrol vehicle multiple times causing the window to come out of the frame.

Neither the children or Bonner were injured during the incident.