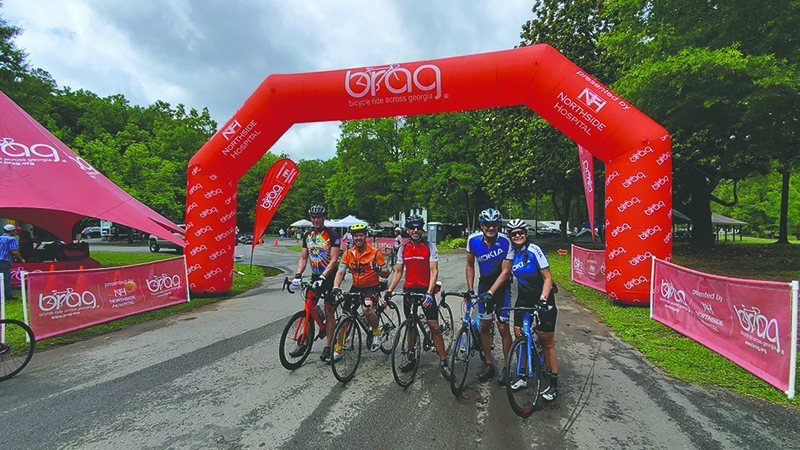 Hundreds of bikers will be cycling through LaGrange on Friday as part of a week-long cycling trip. --Contributed

On Friday, hundreds of cyclists are expected to arrive in downtown LaGrange during the 41st annual Bicycle Ride Across Georgia event, according to a City of LaGrange press release. Riders may arrive as early as 9 a.m.

The cyclists will be participating in Big BRAG, BRAG’s main event of the year, according to brag.org. The ride typically covers about 60 miles a day, the route varying each year. Cyclists get to enjoy festivities and attractions in each city they stop in.

This year’s Big BRAG journey began on June 5 with participants camping on Lookout Mountain, which is on the Tennessee border.

Cyclists began riding their bikes the following day. The event will end on June 12 in Columbus.

Along the way, participants enjoyed a two-day stay in Carrollton. They camped overnight in Lafayette, Cave Spring, Carrollton, and Senoia and will also camp in LaGrange.

Each year, Big BRAG participants follow back roads and paved bike trails for seven days. This year’s participants have rest stops every 10 to 18 miles, as well as support and gear (SAG) vehicles and medics to make their journey comfortable and safe.

Each night, participants get to listen to a different cover band. They’ll cover 80s music, The Beatles, Neil Young, Janis Joplin, Jimi Hendrix, the Allman Brothers, The Cars and others.

Executive director Franklin Johnson said the greatest thing about the event is the sense of community it fosters.

“Everyone’s out on the road together. Everyone shares a common goal and a common mission … we’re all sharing stories of our great adventures throughout the day … It’s very communal,” Johnson said.

There are several ways for people to get home after the event.

“We shuttle folks. A lot of people, we pick them up in Columbus and shuttle them to the top of Lookout. So, when they get done, their car is there,” Johnson said.

He also said many participants get picked up by family members.

“One guy is actually riding his bike home back to Atlanta after he’s done with the ride,” Johnson said.

BRAG is a not-for-profit corporation that provides affordable bicycle tours in Georgia. It was established in 1980, making it the second oldest cross-state bicycle tour in the country.

BRAG emphasizes that its rides aren’t races and are appropriate for people young and old, experienced and inexperienced.