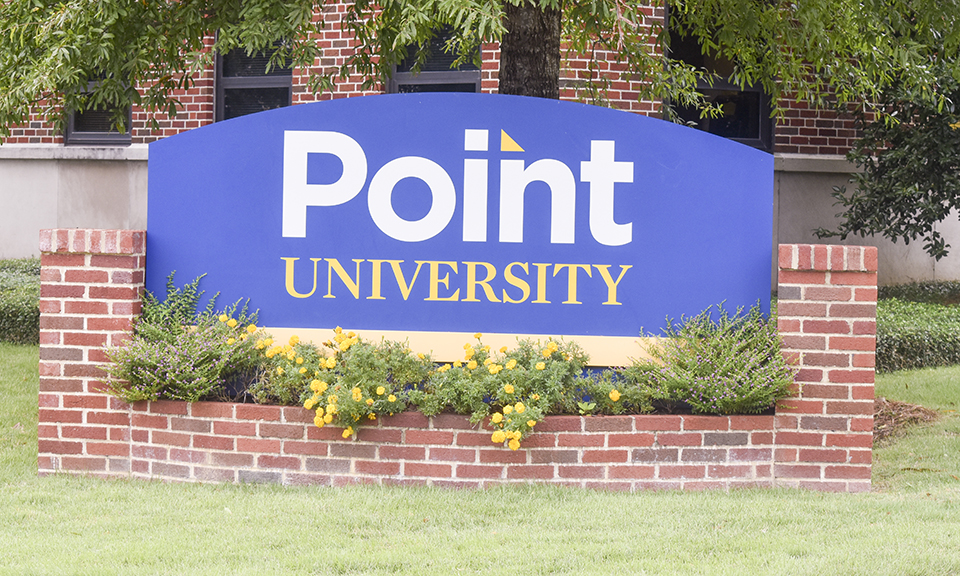 A former Point University athletic trainer has filed a federal lawsuit alleging the university mishandled her claims of sexual assault by a former football coach and also violated Title IX of the Education Amendments of 1972.

The student was a graduate assistant at Point during the fall semester of 2019 as part of a contractual agreement between Point University and Auburn University’s School of Kinesiology. The student is not being identified as the VTN does not identify possible victims in sexual assault cases.

In the suit filed Sept. 26 in U.S. District Court, the student claims Point deprived her “of her legal right to educational opportunities unhindered by sex discrimination after she was first sexually harassed and later sexually assaulted and battered by … a Point graduate student who was also employed as an assistant coach for the men’s football team.”

The graduate assistant coach was arrested in 2020 on first-degree sexual abuse charges, but those charges were dismissed in May 2021. His name is also not being used in this story, since the charges against him were dismissed.

Events that led to the lawsuit

The complaint alleges that within the first week of the student’s graduate assistantship, the assistant coach and graduate student expressed a sexual and romantic interest in her.

“Despite making it clear to [him] that she was not interested in him. [He] continued to compliment [her], telling her she was ‘beautiful’ and ‘perfect’,” along with other harassing remarks,” the complaint said.

The complaint also alleges that the harassment was part of a culture of inappropriate sexual questioning and discussions.

On the evening of Sept. 26, 2019, the complaint says the woman went to several bars in Auburn, Alabama, with a group of Point’s football coaches, including the graduate student. At the end of the evening, out of concern for the coaches’ safety, the student offered her couches as a place to stay until the morning. They took an Uber service to her apartment and arrived at approximately 2:30 a.m.

The complaint states that approximately an hour after arriving at her apartment, the woman was awakened by a man sexually assaulting her.

Point initiated an investigation of the claims at the direction of Hodge. The lawsuit asserts the university instead began to investigate the student making the claim, questioning “… whether or not [she] had “covenant status” within Point’s Christian standards of conduct applicable to its students; whether [she] had consumed alcohol the night of the incident; whether she had engaged in premarital sexual activities; why she had allowed ‘black men’ to sleep in her apartment; and sought to find ‘inconsistencies’ between statements [she] made to different individuals at Point regarding the assault, and as compared to statements she made to the Auburn Police Department as part of its criminal investigation of [the coach], in a willful effort to discredit her.”

Hodge informed the student on Oct 28, 2019, the investigation had concluded and it was determined that her allegations could not be substantiated. The complaint alleges Hodge discouraged her from appealing.

“Ms. Hodge discouraged [the complainant] from appealing her determination because she would ‘just make the same decision,’” according to the lawsuit. Hodge allegedly gave the student the option to work in a different building, while the coach would continue his duties.. The student was told the two would likely be in contact with one another, and the student made it clear that she did not think she could continue her graduate assistantship academic program under the circumstances.

On Oct. 29, 2019, Hodge allegedly called the student and admitted that she “did not know how the investigation process worked,” and she could not give the student a full week to make her decision regarding whether she wanted to continue her graduate assistantship educational program. Instead, she gave her until the following day to make her decision. The student requested more time due to not being able to meet with Auburn University’s graduate assistantship coordinator on short notice.

She then contacted Auburn’s Chief Student Development and Retention Officer, Bernard Hill, to make a complaint that she lacked confidence in Point’s investigative process due to Hodge’s incompetence.

On Nov. 1, 2019, the student informed Hodge that she wanted to continue her graduate assistantship at Point University. In her appeal, she expressed her belief that Hodge was not qualified to conduct Title IX investigations and that her unprofessional and inefficient investigation and overall lack of concern for the student had yielded an unfair result.

The complaint says on Nov. 19, 2019, the student received a call from Point Assistant Head Coach George Brewer warning her that employees were not allowed to speak with her and “that she needed to ‘be smart about how [she went] about things’ with Point, and to ‘let this go’ for the sake of her mental state,” the complaint said.

The suit claims that employees of Auburn’s Violence Prevention & Survivor Advocacy Health Promotion & Wellness Services and Title IX offices were aware that Point had created and published online a Title IX instructional video that included discriminatory statements including, but not limited to, “If you don’t want to get raped, don’t drink,” and “even the tiniest sip” of alcohol could lead to rape, or similar words to convey the same meaning.

“Auburn University terminated the agreement effective Dec. 31, 2019. At that time, the University had no current or future plans to utilize the program,” the email said.

The student is seeking punitive damages of an undisclosed amount. Her attorney Rachel Berlin Benjamin told The Valley Times-News they intended to hold Point accountable for its Title IX violations.

“As a result of the claims asserted in our lawsuit, [her client] has suffered emotional distress, and her career and educational advancement have also been derailed. We look forward to litigating this case and holding Point accountable for its violation of Title IX,” Benjamin said.

Point University said it can’t comment on the case but said it takes all reports of this nature seriously.

“Point University takes all reports of discrimination, sexual harassment and assault very seriously. Our Title IX coordinator and other administrators thoroughly investigate all such reports,” the statement read. “Although we do not comment on pending litigation, we are confident in the University’s processes, which align with federal and state law.”