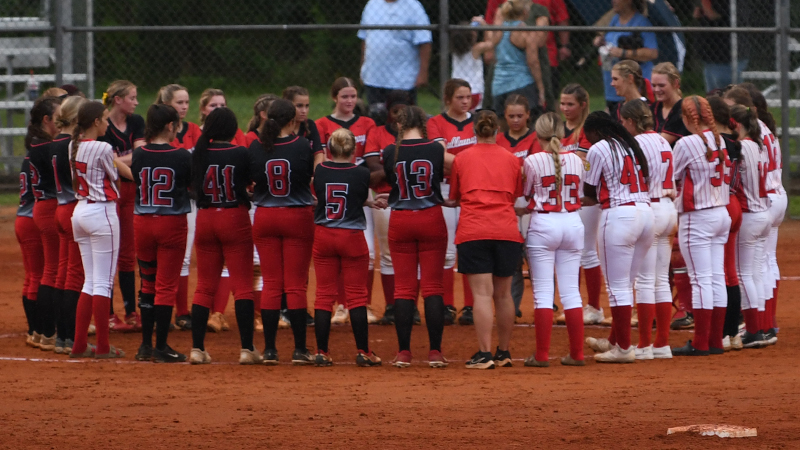 It was another rainy afternoon for the Callaway softball team as the Cavaliers had their fourth game of the season impacted by inclement weather. The Cavaliers hosted Bowdon, whom they lost to 9-1 in five innings of play.

It was a slow start for the Cavaliers who let up a run in the first inning before allowing three, one and four over the following three innings.

It was not a single player doing damage for the Red Devils as the offense produced a ton of timely hits.

With two outs in the bottom of the fifth inning, Emma Bryan hit a RBI double to score the Cavaliers lone run of the evening.

Bryan was on fire tonight as she went 3-for-3 with an RBI as she accumulated half of Callaway’s hits in the game. She is now 5-for-6 on the season with three RBIs as she has all three of the team’s RBIs through two games.

Mackenzie Rhodes scored the Cavaliers only run of the game as she went 1-for-3. Ava Shuford and Savannah Rice got the other two hits for Callaway in the game.

“We had some pretty good at bats,” King said. “We were super aggressive Tuesday night, but we were a bit more passive tonight.”

The Cavaliers are introducing a lot of young girls into the lineup who do not have a lot of experience getting hits off high school pitchers.

“It’s a process,” King said. “It’s a constant process because many of them are coming from 40 foot mounds to 43 (feet).”

Kaitlyn Williams got the start on the mound and pitched the entire game for Callaway.

“It’s still early in the season,” King said. “We want to be playing well down the stretch.”

Callaway drops to 0-2 on its young season. The Cavaliers will be back in action on Saturday in a doubleheader as they face off with crosstown rival Troup at 10 a.m before a date with LaGrange at noon.

“Any time you’re going up against a crosstown rival, it’s a little different atmosphere,” King said. “I expect my girls to be locked in.”