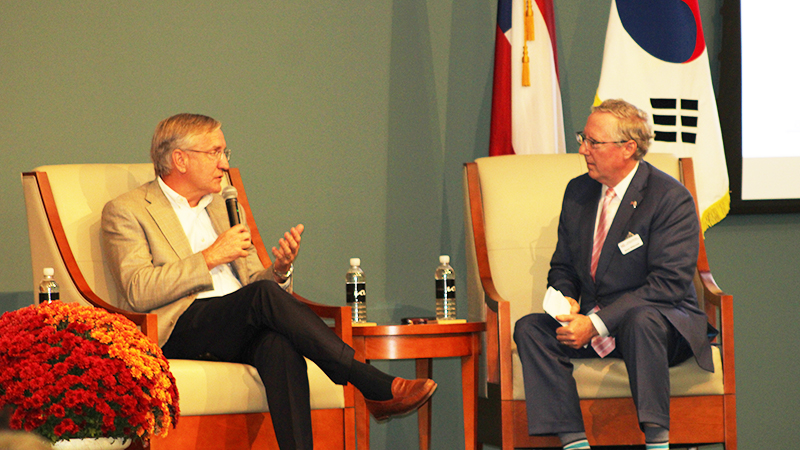 The LaGrange-Troup County of Chamber of Commerce, in partnership with the Southeast U.S. Korean Chamber of Commerce (SEUSKCC) and Consulate General of the Republic of Korea, hosted a workforce development forum for leaders in manufacturing throughout the southeast. The purpose of the event was to discuss the cultural dynamics of Korean companies in the United States as well as the retention of next-generation employees.

The event was kicked off by a short speech from the Consulate General of the Republic of Korea, Yoonjoo Park. During his speech, he noted the importance of the event and how grateful he was for those who were in attendance.

“The topics that we are discussing have been important for a long time. Bridging the cultural gaps in the workforce and focusing on our retention is vital for the success of our businesses and corporations, both here and across the world,” Park said. “I also extend my thanks to all who were able to attend this forum, and I am especially thankful for the Troup County Chamber of Commerce.”

Following Park and a brief period for dinner, Jonathan Martin of Constangy Brooks, Smith & Prophete, a corporate law firm out of Opelika, introduced the first panel by discussing the current landscape of business in the United States, specifically in regards to employee-manager relations. He noted that there are distinct cultural differences between Korean and American workers and that if there is not proper communication, it can lead to misunderstandings and a lack of performance.

“Oftentimes when business leadership comes to me with legal issues, the question to ask is not ‘what is the problem,’ but ‘who is the problem,’” Martin said. “Workers don’t quit companies, they quit bosses. Currently, there appears to be a cultural divide between Korean leaders and American workers, and it is something that has to be addressed in order for businesses to remain efficient, especially in automobile manufacturing.”

After Martin’s introduction, the first panel came up to the stage to discuss how to bridge the cultural gap and expectations in the workforce. On the panel was Stuart Countess, CEO of Kia, Julius Choi, Head of Zinus USA and Stephen Jahng, Head of External Affairs for SK Battery America. Jim Whitcomb, nominating chair of SEUSKCC, served as the moderator.

During the panel, the business leaders discussed their personal experiences with the cultural side of running an international business.

Countess said in his opinion communication was the most important factor to the success of Kia and other companies in similar situations.

“How you communicate with people and how you interact with them is extremely important in business growth and development,” Countess said.

Choi continued the discussion by talking about the importance of inclusion, especially between Koreans and Americans.

While the first panel primarily focused on the cultural gap in the manufacturing business, the second focused on the generation gap between older and younger employees. Kyle Healy, Senior Vice President of Sales Enablement of the global insurance brokerage firm NFP, introduced the topic. In his presentation, he said that job retention is at a critical low.

“We are seeing more people leave their jobs right now more than any other time that we have tracked this,” Healy said. “Younger employees are actively looking for better and better opportunities, and they know that there are certain companies that will give higher and inflated salaries to get them to leave their current job.”

“Younger employees don’t care about health insurance the way that other generations did,” Healy said.

“Things like childcare options and opportunities for growth are far more important. You have to be able to understand the unique problems and issues of your current employees if you want them to stay.”

During the panel, speakers talked about the nature and market of younger employees.

“One of the most important things is that people need to feel like they are valued,” Wyatt said. “What we are finding in the education sector when we ask younger people is that they are looking to see what organizations are going to do to ensure that they can live the lifestyles that they want.”

Mabe continued the discussion by noting that while pay and salary are important, it is also equally important for new employees to feel as though they understand their jobs and feel like they are a part of the company.

“As best as my schedule allows, I try to meet with each of the new members that we hire,” Mabe said. “We try to make sure that new employees feel like they are being heard and that they have a clear understanding and expectation of what the jobs would entail, that way they are more likely to stay.”