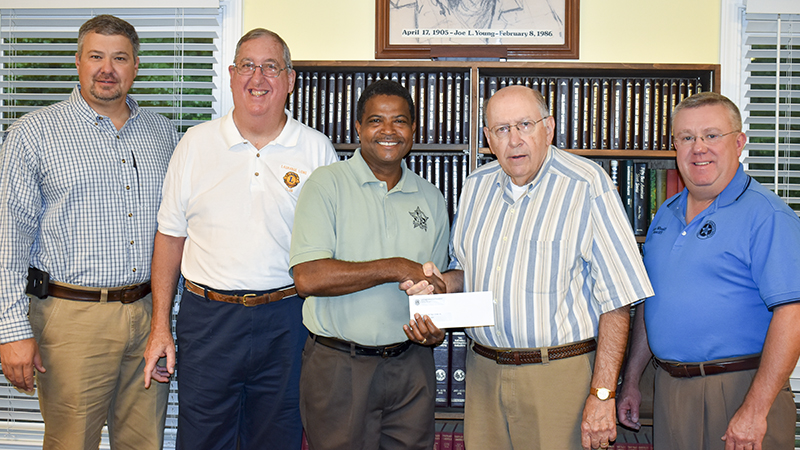 The LaGrange Lions Club donated $4,000 raised from its annual golf tournament to the Georgia Sheriff’s Youth Home at Pineland Thursday.

Club member J.M. Rawlinson said the donation is a great amount for an organization their size. “Over the last five years we have donated to various causes $161,000 and we feel like that’s a great thing for less than 100 people to raise and distribute to those in need,” Rawlins said.

Sheriff James Woodruff said the donation will go toward buying a car lift to teach the residents of the home simple mechanics.

“One thing that we’re going to do with that money is buy a lift that we’re going to put in our barn. We’ve got so many vehicles and equipment that this will save us money in changing oil and rotating tires,” Woodruff said. “Plus, Dewey Lee, who is employed here, used to teach shop in high schools, so he’s going to teach young boys how to change the oil and rotate tires and do simple mechanic stuff on trucks and cars. It’s a two-way win, saves us money and teaches them a life skill that’s very valuable.”

Woodruff said they might also use some of the donations for new computers for the media room or to buy patio furniture.

“We would just like to get some patio furniture and stuff for the kids. Sometimes when their families come to visit, it gives them a place.”

The golf tournament is one of the few fundraisers the Lions Club holds each year, Rawlins said.

“We have two or three fundraisers, the golf tournament, the barbecues,” he said.

While the club donates to the local sheriff’s home every year, they made it their main charity for the tournament, Rawlins said.

Woodruff said the sheriff’s home is grateful for the donation.

“We certainly couldn’t do it without the generosity of the Lions Club, and I’m glad to be a member of that club,” he said.