Locals show off their Christmas spirit at Ugly Sweater Party 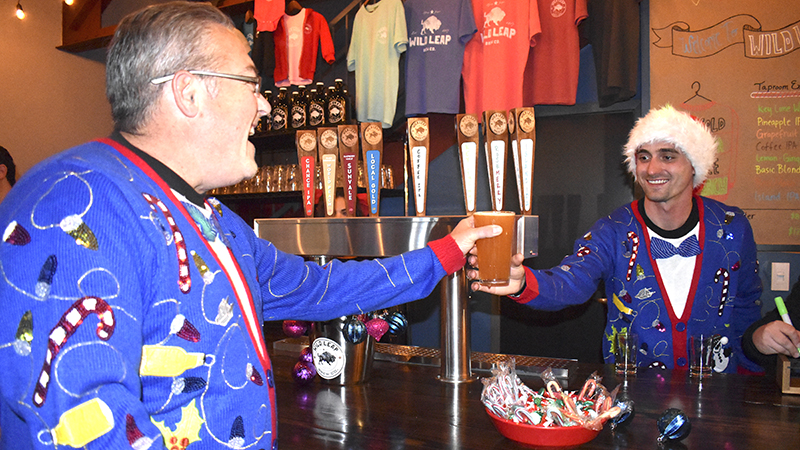 The event was meant to bring fun and also have attendants try some Christmas themed beer, like ginger bread or peppermint, according to co-founder Anthony Rodriguez.

“It’s really just to have fun, to be silly and have people dress tacky and come out and have a good time, drink some good beer,” Rodriguez said.

Rodriguez said the brewery holds an event that requires a ticket and one that doesn’t every month.

“What we try to do it at least one ticketed event a month, [something] that we bring in a nice band and a DJ and something where everyone can get together and have fun and with that, but we also try to do events that allow people to go out and have something to do so this is an un-ticketed event just like that,” he said. “So, everything tonight is just walk right in and enjoy the environment.”

Prizes for the ugliest sweaters were a Wild Leap gift card and tickets to the brewery’s New Year’s Eve party, according to Rodriguez.

Donna Leatherman bought her sweater that featured penguins with Santa hats to show her festiveness.

“Penguins are my spirit animal, love the flashiness because I am a very flashy person,” Leatherman said. “[My friends and I] been here about three times and we love it. We love the concepts and enjoy the people.”

Ashley Sandoval’s homemade sweater was decorated with pipe cleaners and garland. She said she may keep wearing her sweater for other events.

“Probably if I go to any other events, I will,” Sandoval said. “It’s pretty easy to make, all you need is a hot glue gun and felt pipe cleaners, that’s about it.”

Others just had sweaters in their closets. Brittney Keel said she had owner the blue sweater she wore for many years. Keel’s sweater featured a decorative fireplace and a Christmas tree.

“I’ve had this one for so long, I don’t even know where I got it,” Keel said.

“I think it’s great. I just moved down here last year from Pittsburgh, and I’ve been trying to find more and more stuff to do,” Van Dyke said.