Sweetland on Ice a big hit 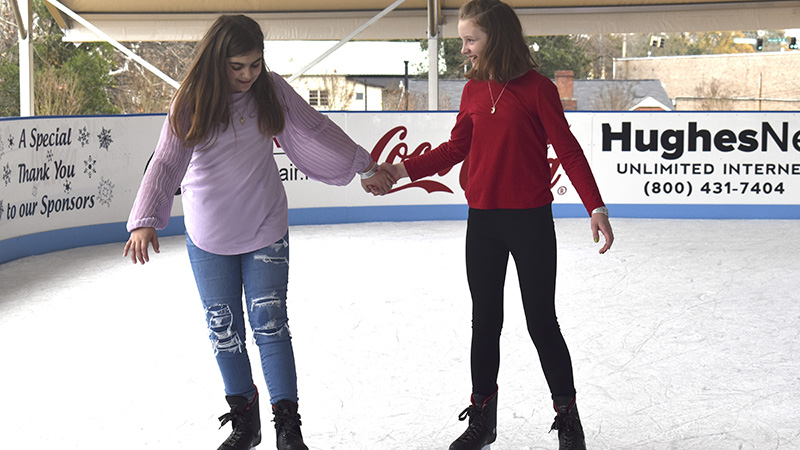 In the final days before Christmas, Sweetland Amphitheatre’s ice rink is a popular spot.

On Thursday, children, parents and grandparents shared the ice rink at Sweetland On Ice as Christmas music played in the background.

“This is nice because it’s closer to us than having to go way out in Atlanta. This is a tradition, we go every year right before Christmas, like two to three days before Christmas. We try to go around the same time every year,” Hansen said. “We hope that this continues in LaGrange so that we don’t have to go all the way down to Atlanta.”

Hansen’s daughter, Alexis, said she was excited about the outdoor rink.

“I like how they have lights at night. The rink is pretty big, I like that,” Alexis said.

LaGrange resident Diane Fondren said Thursday was the first time she took her granddaughter, Reese Humphries, to the rink.

“(This is) the first time she’s ever had a pair (of skates) on, and she’s loving it. It is so fun, it’s such a great thing. She’s been having a fit to come, so I was keeping her today, and we’ve had a great time,” Fondren said. “It’s spectacular. It’s really awesome, and it’s just been so much fun for the kids, her whole family is coming tomorrow. I love LaGrange, and I think it’s awesome what they offer to the community.”

Libba Bowling said she brought her grandchildren and was happy that Sweetland put this on.

“I am so excited about Sweetland, and they have this here,” Bowling said.

“I just love Sweetland, and this is such great entertainment.”

Hansen said her family will be back.

“We’re definitely going to come one day next week during the night because it looks pretty cool,” she said.