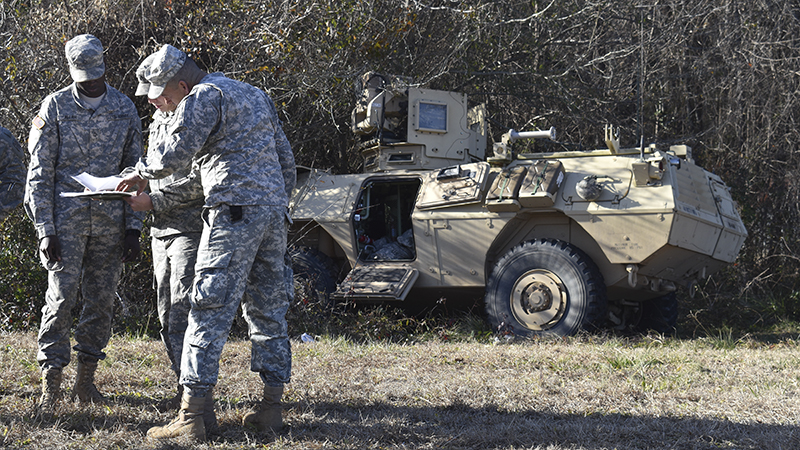 No injuries were reported after a U.S. Army vehicle lost control Thursday afternoon and hit a utility pole and a tree on New Franklin Road by Ann Bailey Way.

According to LaGrange Police Officer Brandon Sparks, the vehicle was traveling south in the right-hand lane when the driver thought he could not stop in time, swerved into the left-hand lane, wobbled, swerved in the right lane, lost control and hit the pole before hitting a tree.

The electric line from the utility pole was suspended, but the power was still on, according to LaGrange Police Senior Officer Chad Bohannon.

The truck was traveling with a U.S. Army Convoy from Fort Benning to its duty station in Calhoun, according to Georgia State Patrol Trooper George Cotton.

A man allegedly walked behind the counter of a Summit convenience store and took four $10 bills from a register on Vernon Street Wednesday around 7:23 p.m.

A clerk told police she was in the back of the store when the man entered the store. When she saw him come from behind the counter she noticed one of his hands was clinched and asked what he was holding. The clerk told police that the man left as she called 911.

The store manager told police that the man had recently applied for a job at the store, but she turned him down since he had a criminal history.

A 1999 Chevrolet Camaro was allegedly scratched at the 200 block of Davis Street between Tuesday at 10 p.m. and Wednesday at 8:30 a.m.

According to the police report, there were scratches on both sides of the vehicle, the front quarter panel to the rear bumper, the hood, the roof and both rear view mirrors.

All information in this report is gathered from official law enforcement and public safety reports and releases. Reach the LaGrange Daily News at 706-884-7311.