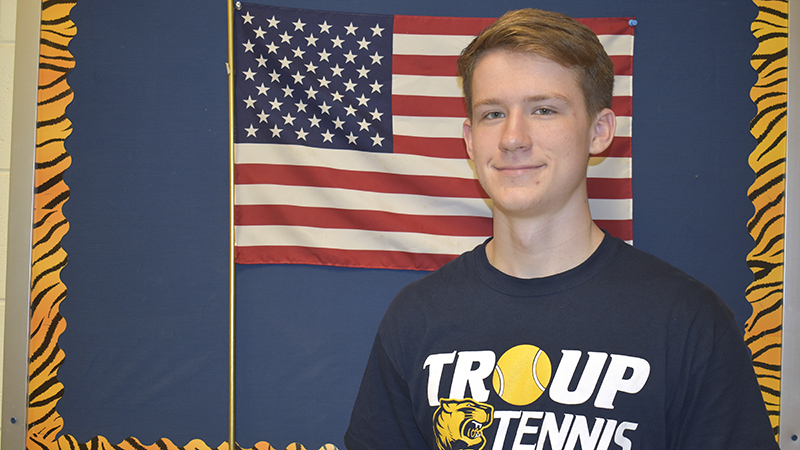 While he missed the courtesy that comes from residents of Troup County, Troup High School junior Harrison Lawson said he misses the fast pace of Washington, D.C. where he worked in the U.S. Senate Page Program last semester.

Lawson said he was always interested in politics, so when he was eligible, he applied through Georgia Sen. Johnny Isakson’s website.

“Sen. Isakson sponsored me to go be a page, but, officially, I worked for the Republican Party in the Senate,” Lawson said.

Duties Lawson performed included preparing desks for senators to speak, taking copies of bills to different places and making sure media outlets had information about the bills and vote tallies on them.

“D.C., it’s a lot different from LaGrange, but the Capitol Hill neighborhood kind of has a small town feel to it because you see the same people at the same stores,” Lawson said. “It still felt like home, but then you go to downtown D.C., and, of course, it’s a major metropolitan area.”

Lawson said the most challenging aspects of the program was time management because the Capitol was so fast-paced and the school program was difficult. He said he would wake up at 5 a.m. to go to school, which was in the basement of his dorm program.

“School would last until 8:30 or 9:30 depending on whenever the Senate convened that day,” he said. “Most of the learning was through homework. It was difficult, but it was worth it.”

Lawson said even though members of Congress disagreed, everyone was still friends, and were not as vitriolic as it seemed in the media.

“Everyone’s just normal, just trying to live life,” Lawson said. “I think we should spend less time at each other’s neck and more time working together.”

He said there were 26 other students in the program.

“It was fun getting to meet everyone from around the country,” Lawson said.

Lawson said he and the other students in the program also took field trips around the Capitol, such as Gettysburg, Pennsylvania, and Jamestown, Virginia.

One of his favorite parts of the program was seeing and meeting political figures he saw growing up.

“Holding the door for Sen. McCain or picking up his cane was definitely a cool moment for me and him stopping to talk would be cool,” Lawson said.

Lawson also had access to Capitol Hill, and he and his classmates were able to view original documents at the National Archives, like the Kansas-Nebraska Act.

Personally, Lawson said he doesn’t think he will go in to politics after high school.

“I always liked watching politics,” he said. “I don’t know if it’s something I envision in my future.”

Back at THS this semester, Lawson is a member of the school’s tennis team and is a student ambassador.

He said he also works on the crew for the school’s theatre program and is a member of the Troup County Prevention Coalition Youth Action Board.

He is the son of Shannon and Johnathan Lawson.