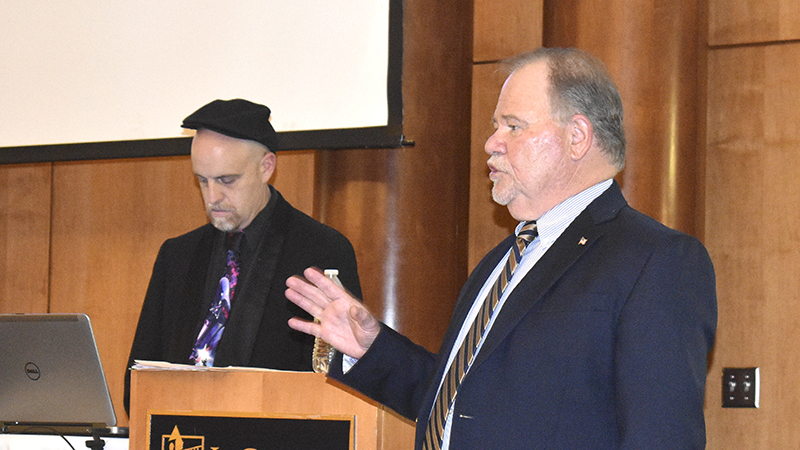 Mike Stewart spoke to a crowd of Troup High School and LaGrange College students Friday at the Dickson Assembly Room at Turner Hall. THS students were at the college campus for the annual Model UN and stayed for the talk, which was one of the college’s cultural enrichment lectures.

Stewart has also worked for the US Department of State, USAID on different projects and with relief groups in Iraq, Afghanistan and Turkey. He has also worked in county manager and commission positions across the state of Georgia.

“In 2003, the second Iraq war started, and I was watching the news every night and seeing Americans getting killed and feeling all of this guilt about not being able to do anything,” Stewart said.

Stewart said one night he watched a speech where former President George W. Bush mentioned the need for Americans with government backgrounds to volunteer and help rebuild governments in the middle east. Stewart said he applied in April, and in August, he was in Bagdad, Iraq for training.

“I found every way I possibly could [to help]. As soon as the State Department started advertising, I applied,” Stewart said.

Stewart said he made a lot of friends while in the Middle East and became friends with Muslims.

“Not all Muslims hate all Christians. Not all Muslims are terrorists. I learned that people are basically the same everywhere,” Stewart said. “If I could get one person to understand that not all Americans are the evil invaders, and that we cared about what was going on in their country, and I did that with a lot of people.”

Stewart also showed students photos from his travels. Stewart said while abroad, he saw the Dead Sea and the Temple of Hercules in Amman, Jordan. He also told students about visiting the King Abdullah Mosque, which was right across from a Catholic church.

“This mosque was one of the few mosques that non-Muslims could go in,” Stewart said. “It’s funny, you could hear all of the prayer from the mosque and then hear the ringing of the church bells on Sunday morning.”