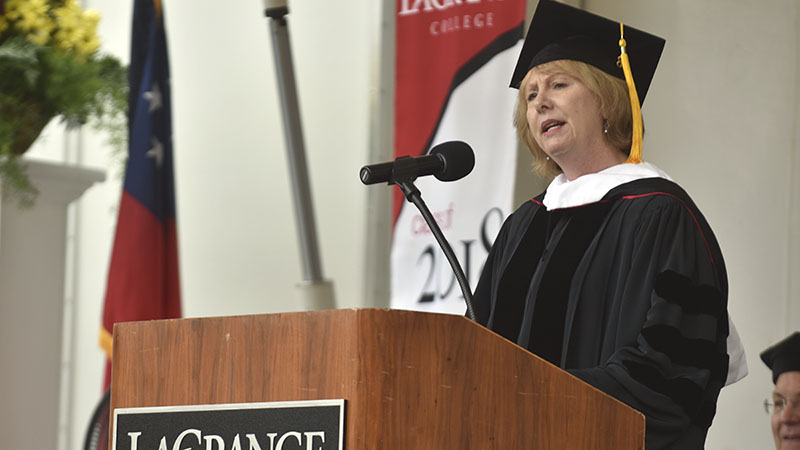 CORRECTION: This story has been updated to clarify Nancy Durand’s role as secretary of the Board of Trustees.

Sue Haupert-Johnson, a bishop of North Georgia Episcopal Area of the United Methodist Church, was awarded an honorary doctorate of humanities at the ceremony. Huapert-Johnson told graduates to follow God’s calling and told her story — one that led her from being a lawyer to becoming a religious leader.

“I look back on the terrified graduate that I was and realize I had nothing to fear — God’s got this,” Haupert-Johnson said. “Life is an adventure in which we should listen and watch for God’s call on our lives. Sometimes it is a small voice from within, or a certainty about a decision, or a door that opens or closes, or a trusted friend that speaks truth that we can’t ignore. And yes, we make missteps, but God even uses our mistakes to teach us and help us hone into our calling. I use my legal training everyday as a bishop, and the experiences of law school and practicing law taught me much.”

Graduate Garrett Todd Wallace was named the Waights G. Henry Jr. Leadership Award recipient, the highest award for a student to be given at the college. Wallace, a religion-youth ministries major and servant leadership minor, gave a speech to the audience about his time in the college’s servant scholars program.

“I used to think that graduating college was all about starting a journey up the career ladder. I wanted a nice house, a cool car, a boat, all the material things that life can provide,” Wallace said.

“But my time at LaGrange College changed all that. Sitting with people who are struggling, and listening to their stories every single week, feeling the pain that they carry with them each week, changed me.”

Class of 1968 alumna Nancy Newman Durand was given an honorary doctorate of humanities. Durand was named to the college’s wall of outstanding alumni in 2010 and had been on the board of trustees and worked with the student affairs committee, building and grounds committee, academic affairs committee, development committee and the solicitation committee for defining moment campaign.

She was also the secretary for the Board of Trustees and worked as a co-chair for the 3D Journeys committee.

Durand told graduates to come back and support the college however they can and take pride in the college.

“As you graduate today and leave this special place, you’ll be joining thousands of men and women who have walked where you walked, lived where you lived, eaten where you’ve eaten, studied where you studied, learned where you have learned, partied where you partied and prayed where you prayed,” Newman said. “These men and women have left LaGrange College to find their own special place in the world always remembering their college days, the friends they made here the memories they share with those friends and the values that they learned from it.”

The class of 2018 presented a $923.91 check from the giveback challenge to the school. The class had about 70 percent participation, according to LaGrange College news and feature writer Debby Baker.

“We hope that you carry the values that have guided your experience here, to be ethical, to be caring, to value civility, diversity, service and excellence,” said college president Dan McAlexander. “That you will carry these values with you and strive each to live guided by them in your personal and professional lives. If you will hold fast to them, you will indeed be successful responsible citizens and lead lives of integrity and moral courage.”