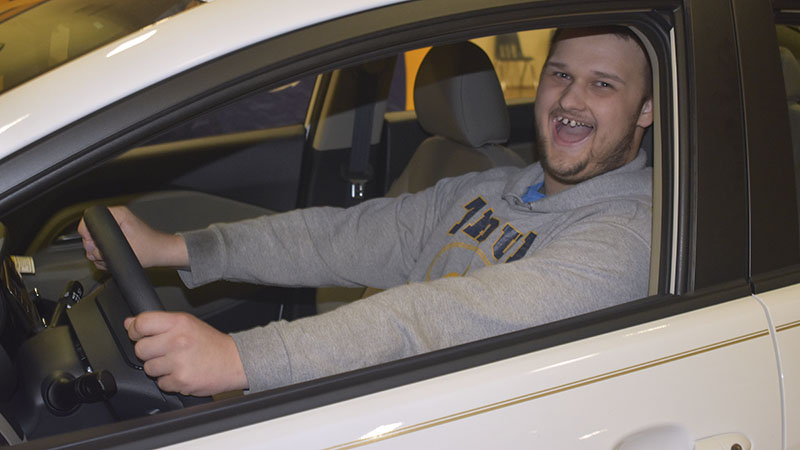 Before David “DW” Ward Jr.’s name was called as one of ten finalists for Troup High School’s car’s giveaway, he was just hoping to win one of the smaller prizes, such as tickets to Six Flags. The 15-year-old sophomore went home with a much bigger prize on Friday — a new Kia Rio.

“Truthfully, my hope was that I would win the tickets to the movie tickets, but the car is nice,” Ward said.

THS partnered with Kia of LaGrange to give a car away at the end of the year for students. The giveaway was part of the school’s positive behavior incentive system this year to bring up attendance and grades.

To be entered for the drawing, students could not miss more than four days of school, had to have good grades and no discipline referrals. About 145 students had their names entered up to 16 times based on the criteria, according to THS principal Chip Medders.

“We had some (students) who made all A’s, some who had perfect attendance, some made A/B honor roll, and therefore they had multiple entries into it,” Medders said.

“I think DW had nine entries.”

LaGrange High School and Callaway High School also held car giveaways this month that were also a part of the Positive Behavior Interventions and Supports program.

“So, it’s really to drive home core values of respecting yourself, respecting others and that comes grades and attendance and behavior, and it just really worked this year. So, we’re proud of the PBIS program and the steps we’re making at Troup High School with that program.”

Ward said students should focus on paying attention in class and doing well on their assignments if the incentive continues, and they hope to win a car in the future.

Medders said he talked to Kia of LaGrange owners Shea and Jesse Liechty last year about giving the school a used car for PBIS, but they instead donated a new one.

Ward said since he doesn’t have his driver’s license yet, he will give it to his father David until he is ready.

“I actually didn’t expect to win the car,” Ward said. “My goal is whenever there’s a competition, always expect you’re going to lose because then, if you do win, you’ll just feel even happier.”

Medders said Ward is popular with other students.

“He’s extremely talkative, and he has a lot of friends and wants to meet people and have conversations. I think I talk to him every single day. He comes by to have a conversation with me, (I’m) so very excited, very excited for him and his family,” Medders said.

“And we knew that a 14-year-old, 15-year-old — it’s possible they could win the car, freshman or sophomore, and lo-and-behold, he’s 15, but you know what, he’s got a great 16th birthday present waiting on him now.”