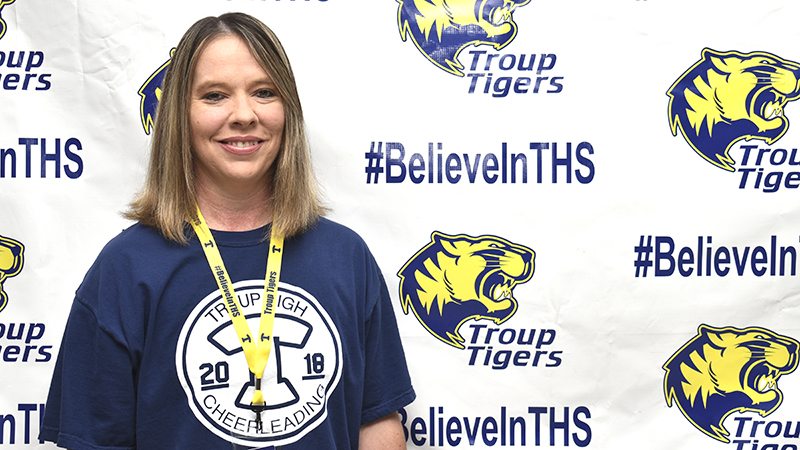 Troup High School principal Niki Watts graduated from the school in 1995. She was hired as an English teacher in 2000 and was promoted to assistant principal in 2014. (Gabrielle Jansen | Daily News)

Editor’s Note: This is the first part of a series of stories featuring new principals in Troup County.

“I’ve literally been at Troup High the vast majority of my life, which was by choice,” Watts said.

Watts, a 1995 THS graduate, has worked at the school for 14 years as an English teacher and three years as assistant principal. Watts was promoted to principal of the school after former principal Chip Medders took the position of human resource director for the Troup County School System.

Watts did her undergraduate degree at LaGrange College and interned at THS during her time there. After her internship, she was hired in the fall of 2000.

Watts said she taught all grades and grade levels of English as well as coaching sports at THS before Medders promoted her to assistant principal. She said her role has not changed much with her new position.

“I have the same expectations for working hard and accountability and monitoring as I did even in my previous role as an assistant principal,” Watts said. “Mr. Medders has a really solid foundation that was established for us, so my goal is to build on the good things that we’re already doing and to address our areas of weakness. I think we have an excellent plan in place to make that happen, and I’m excited to be able to serve for a place that has meant so much to me in this new capacity.”

Watts said she will continue the Positive Behavior Incentive System, which started last year, and the school plans to do the car giveaway for  a student who wins the drawing after meeting grades, attendance and behavior requirements with Kia of LaGrange again.

Watts said she will also continue to bring her black cat Harlow to the school, which has almost become the front office’s mascot.

“THS and the people here are my home and my family,” Watts said. “I spend far more time here than I do at my own house.”

With almost a week until the school year begins, Watts said she is excited.

“We’ve got some fantastic new teachers, there are going to be some great additions to our staff,” Watts said. “I’m looking forward to the opportunity to meet them, and get them acclimated to THS and who we are. There’s a certain level of stress as well. We’ve got a lot to do in a short amount of time in preparation. There’s a little bit of nerves, a little bit of stress, but it’s in a good way. It’s kind of excited anticipation.”

Outside of THS, Watts said she enjoys playing sports and being outdoors when the weather is clear and reading classic novels when it’s rainy out.

Watts said the school’s diversity and how it feels like a family are her favorite things about THS.

“We have a very diverse student population, a diverse clientele of stake holders and community members who are a part of our THS family,” Watts said. “That’s something I’ve enjoyed as a student and as a professional working here at THS. There’s something here for everybody, and we run the gamut of a student population and a staff population not just racially and with gender, but with our students interests and hobbies and financial situations. If you really want a real-world life experience of a little bit of everything, you get that here. I love that diversity, I always have and the sense of family that goes along with that. Like a family we may have our differences and there may be times we don’t agree or have different preferences, but at the end of the day, we support each other and have each other’s backs.”