Hoping for a great year: Yohn excited to work with students at Hope Academy 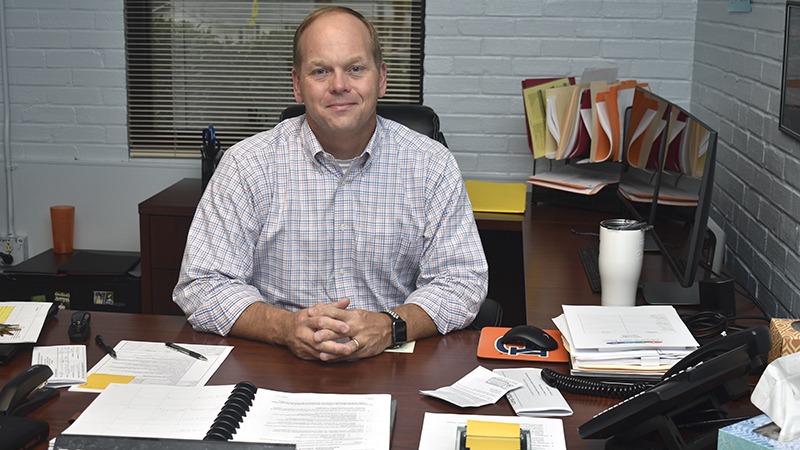 New Hope Academy Pricipal Jason Yohn said he is excited for the new school year to start. Yohn has worked as a principal for 12 years and has been in education for 25 years. (Gabrielle Jansen | Daily News)

Editor’s Note: This is the second part of a series of stories featuring new principals in Troup County.

“Christmas Day” is close for new Hope Academy principal Jason Yohn. He compares the night before the first day of the school year to the holiday, since he can’t sleep due to excitement.

“Strangely enough, it’s just the newness, the excitement,” Yohn said. “I’m not sure if our kids are excited about coming back to school, but I like working with people. … I’m looking forward to getting to know [the students].”

Yohn has worked in education for 25 years and 12 years as a principal for schools in Tallapoosa, Lee and Shelby counties in Alabama. Last year, Yohn was the academic dean of Shaw High School.

This year, Yohn is excited to be working with the students, faculty and staff at Hope Academy.

Hope Academy is an alternative academy for students who have been suspended long term or expelled from their previous public schools. Yohn said they are starting the year with 26 students.

“The kids are here anywhere from nine weeks to a year, depending on what happened,” Yohn said. “They are here because they did something somewhere in a school that wasn’t appropriate, and we’re here to help educate while they’re out of their main setting and hopefully keep them academically ready and get them back to their home schools, which is the main goal, where they can be successful.”

Yohn said this is his first time working at an alternative academy.

“I’m looking forward to being involved in something new like this because I’m a lifelong learner,” Yohn said. “I want to keep learning, and this is a new challenge for me.”

Yohn said much like at the other schools where he has taught, he wants the children to be ready to learn as soon as class starts.

“We want to change the perception of what this building’s about,” Yohn said. “We want to serve the kids because that’s what we’re here to do, and we want to do it the best we can. We do that with strict processes in place … [We’re] trying to benefit them and to help them progress and give them some skills they can even take on into their adult lives.”

This year, the school will also include a service learning program, and the 2018-2019 school year’s focus will be on sustainability, according to Yohn.

He said his favorite thing about working in education is watching a student understand what they’re learning.

“I think watching the lightbulb come on in a kid has always been a fun thing. For me it is when they finally get it,” Yohn said. “If we can reach one, we’ve done our job. We hope to reach more than one, but if we can affect the life positively of one kid, then everything that we do to get to that point is well worth it.”

A Smiths Station, Alabama resident, Yohn said he has been to LaGrange when his sons Ellis, 15, and Emory, 12, have played baseball against local teams. Yohn said he spends his free time with his wife Kathy going to their sons’ baseball games.

‘What I saw, in my opinion, were unlivable conditions’