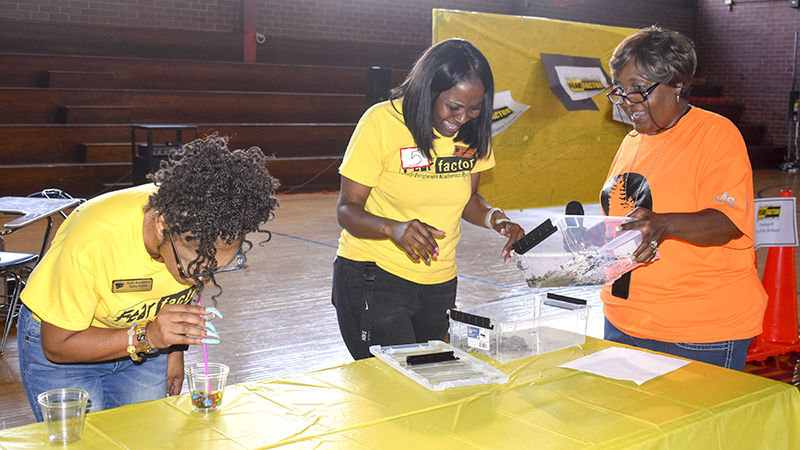 Twin Cedar’s Ault Academy hosted a Fear Factor competition between its teachers and the Troup County Sheriff’s Office. Ten teams of two competed. Activities included one team member having to keep their hands in a container full of worms while their teammate transferred candy from one cup to another with only a straw. Another activity included transferring live goldfish by hand from one bowl to another, and the second team member having to swallow a sardine afterwards. (Gabrielle Jansen | Daily News)

It was a competition of who had more grit Thursday between Ault Academy teachers and Troup County Sheriff’s officers. The academy held a Fear Factor competition between its teachers and law enforcement to start the school year.

Ault Academy principal Janice Brewer said this is the second year they have held the event for students.

“What we want them to get out of this is to come into the school without any fears whatsoever, leave their fears behind,” Brewer said. “In order for them to do that, we wanted to show them that we’re going to face our fears.”

Brewer said Fear Factor stood for Family Enrichment Academics Readiness. A part of Twin Cedars Youth and Family Services, Ault Academy is an accredited residential program for boys adjudicated through the system. Brewer said they have 37 boys at Ault Academy.

“[The event is] just to come in and get the boys hyped up and get them ready for school because they come with so many different challenges,” Brewer said. “We want them to know that even though they have challenges, you can come in and you can still be able to get your education because we value education so much.”

“[Last year] we had a great turnout, but we just competed against ourselves,” Brewer said. “This year we thought it would be a bit more competitive by inviting the Troup County Sheriff’s Department.”

“Fear Factor is nothing like the television show, but is something that is doable for everybody, and we’re looking to have fun,” Derwin said.

In the first challenge, one team member had to keep their hands in a container filled with worms while their teammate used a straw to transfer candy from one cup to another. In the second challenge, one teammate transferred five live goldfish from one bowl to another by hand, and after they finished, the second teammate had to eat a sardine. The last challenge had one team member stand in a bucket of ice water while the other person searched for five yellow paper clips.

Derwin and Kennedy won the competition.