Changing careers works out for Lee 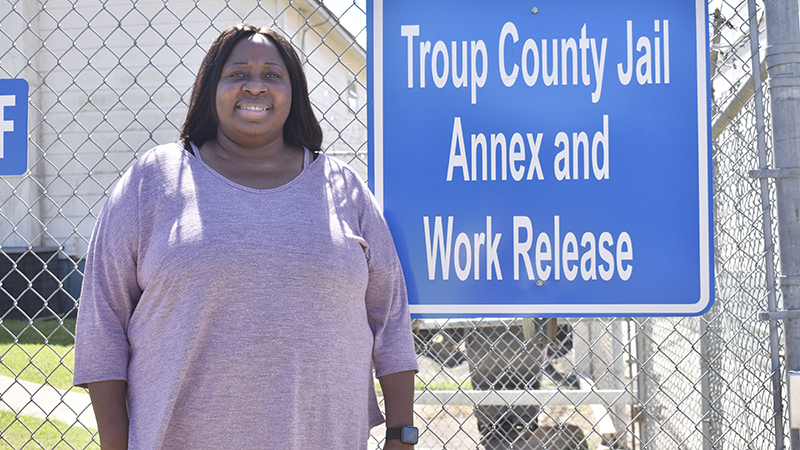 Changing career tracks can sometimes be drastic. Troup County Sheriff’s Office Capt. Sadie Lee said communication is the only similarity between running the work release program now and her previous job as a sales representative for a poultry company.

Lee originally worked for a poultry company in Atlanta before taking a job as an officer for the Troup County Correctional Institution 14 years ago.

Originally from Guntersville, Alabama, Lee moved to LaGrange for family.

“I came from a small town in Alabama and what I love about LaGrange is that it’s bigger than where I came from, but it has that small town feeling that people are close-knit,” Lee said.

Lee worked her way up from an officer to a counselor at the prison up to the deputy warden position before the correctional institution closed.

After Troup County closed the institution, which ran the work release program, the TCSO took it on. Lee was hired on as the director of the work release and work detail program and said the transition was seamless.

“Part of what we do at the work release program is related to what we did at the prison before,” Lee said. “I’ve always had a really good relationship working with the sheriff’s department because a third of our population came from the sheriff’s office.”

Lee said work release is now on a smaller scale than when the prison was open. Work detail is for inmates who work with TCSO jail officers picking up trash and cleaning county buildings. Work release is for inmates sentenced to serve county time who are allowed to have full-time jobs, so they can pay off fines and help support their families.

“I think one of the main challenges for us is getting people who qualify for the program and them maintaining a job and being able to stay in the program because it changes daily,” Lee said.

However, Lee said she enjoys the challenges of her job.

“Every day there’s something different, and what I mainly love is the fact that we’re able to, while getting people here to serve their time, we’re also still allowing them to be a productive member of society,” Lee said.

As part of the TCSO, Lee said she enjoys getting to have more interaction with the community.

“One of the things that I do like – dealing with the sheriff’s department — we see more of the community now,” Lee said.