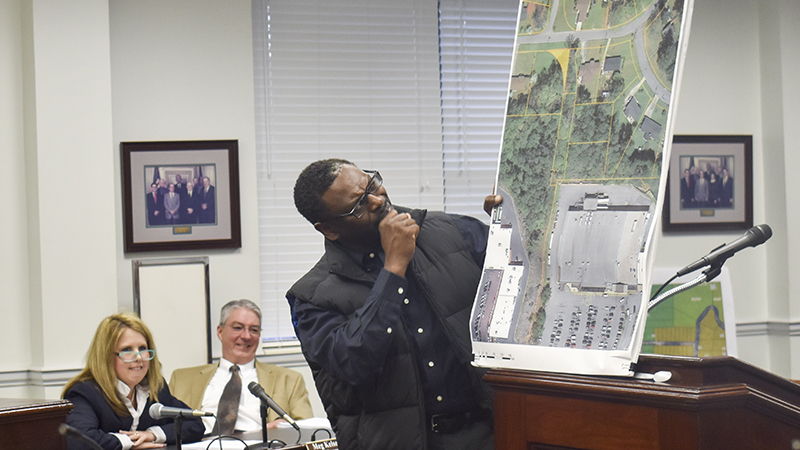 Community Development Director Alton West discusses the details of a property on Hickory Terrace during a meeting on Tuesday. -- Alicia B. Hill

The LaGrange City Council voted Tuesday to abandon a small piece of property on Hickory Terrace, making it possible for a home to be built in that location.

The council’s approval of the abandonment of the property, meant that the owner of the adjacent property could purchase enough land from the city to be able to legally build a home on the property. Hickory Terrace is located in the neighborhood behind Kroger.

“When the street was laid out, for some reason, they ate into that lot there to the west of (the street) which is the property that is owned by the sisters to the Daniels,” Community Development Director Alton Brown said. “The proposal (is due to the fact) that they would like to sell this piece of property and then the potential buyer is interested in constructing a home on the property. However, the issue is that all the lots have to front 40 feet on the city street, and with the way the lot is shaped, they don’t have that 40 foot front to be able to construct a home.”

According to West, the family wishes to sell the land in order to help a relative in the nursing home, and the city does not have any current plans for that area.

“I don’t see a future roadway going through there,” City Manager Meg Kelsey said. “My only concern that I mentioned to Alton is if there is any flooding in that area, I would just make sure that that is not in the flood zone that we are not going to impact anybody.”

West said that the property is not in an area that is on the map as a flood plain. The city did not abandon the rest of the city-owned property that was set aside for a possible road at that location since that would have left two properties landlocked, without access to a city road. Councilmember Mark Mitchell asked that city staff ensure that there was adequate access space on the remaining property before the Hickory Terrace property was abandoned.