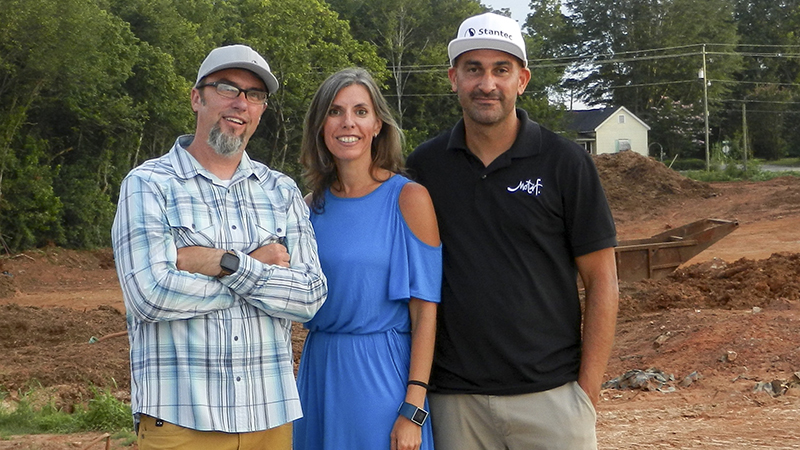 The plans for the layout of the downtown skate plaza were recently finalized, and the city council had the chance to review those plans during last week’s work session.

The plans for the plaza detail the layout of the 15,000 square foot part including a large planter within the plaza containing a tree, colors similar to LaGrange’s downtown and plenty of features skateboarders can use to practice their skills. Some details like landscaping and benches surrounding the plaza are part of a plan that should be released at a later date. The next step will be for the creation of construction plans, and the plaza itself could be complete as soon as summer of 2018 if everything goes smoothly.

“It is a plaza type feel,” City Planner Leigh Threadgill said. “The local skateboarding community that was involved in the process was very clear about the importance of street skating. There are two different types of skating: what is called transition skating — which uses much more bowls and halfpipes and big kind of X-Games events — and then this street skating sport — which is a little more conducive to the urban environment and what is naturally found in downtown areas — which I think is why our skateboarders tend to gravitate toward downtown where a lot of those features are already there. We are trying to gang them up and pack them into this space that is designated for them to be safe. Somewhere where they can come and hang out.”

The City of LaGrange banned skating in many areas downtown in April 2016, citing safety concerns and discussion of a possible skate park followed soon after.

“When we adopted the ordinance to ban skating in downtown — we did that what? A year and a half ago — we said we are going to try to provide a place for the kids to go,” Mayor Jim Thornton said. “It is just not safe for them to be in the parking deck around cars.”

The location of the skate plaza was finalized earlier this year, and community meetings were held on the plaza’s design in May and August where city officials and professional skateboarder turned skate park planner Kanten Russell discussed design possibilities with local skateboarders.

“We undertook this project a while ago after you all as a council had some issues with dangerous skateboarding situations in some of our downtown areas,” Threadgill said. “The parking deck was one of them and some of the service lots were too, so staff was asked to look at providing a safe space for folks to skate, so that we could essentially make illegal skating on some of these public properties that were not safe places for the skateboarders or the motorists.”

The skate plaza will also be open to scooters, BMX bikes and other similar uses. The features such as the rails, ramps and even concrete in the skate plaza will be reinforced to withstand the use of the skateboarding community, according to Threadgill.

The plaza is expected to cost $750,000, which will be covered by funding for park improvements from the 2011 Special Purpose Local Option Sales Tax. The new SPLOST will not take effect until January 2019.

Council member Willie Edmondson verified that the park will still be one of several projects in district 2 during the meeting.

“The skate park is on about a ¾ acre lot of that land, and it is directly adjacent to the Bull Street right of way and (against) the rail right of way to the east,” Threadgill said. “There are some other recreational amenities that are programed for that space that the Callaway Foundation is going to be working on, but we’ve been focusing on that skate plaza design.”

The skate plaza will be located across the street from District 4 Public Health and will feature one of the segments of The Thread trail in what the council hopes will be a completely revitalized area in the near future.

“Given that this is in our downtown, [we] really want to create a space that fit in, was in character with the historic downtown,” Threadgill said. “Obviously, we are looking at revitalizing this with the brewery coming online. This is just south of the brewery. This is [near] the park space that the Callaway Foundation is looking at doing. We really want to make a quality environment, something that everybody — not just the skateboarding community — [can enjoy]. That is why we went with the plaza design and all the flex space where folks can walk. The trail will be coming through here, and there will be a lot of pedestrian, bicycle circulation throughout the five acres that will work nicely with other amenities. Also, it’s an amenity that hits that teenage age group which we hear a lot from folks about the lack of activities for our adolescents and our youth.”

The council has heard concern from residents in the past that the city does not provide enough activities for teens, and they have expressed hope on several occasions that this skate plaza will help fill some of that need. Threadgill has already heard support of the project from local skateboarders and parents who are glad that there will soon be somewhere safe to skateboard and spend time.

“I think we are going to end up with an amenity that is going to be beloved by our skateboarders,” Threadgill said.

Use of the skate plaza will likely be limited to daytime hours or 9 a.m. to 9 p.m. once it is complete, which would be consistent with other city park spaces. However, official times have not yet been established for the park since it is currently under construction, and Thornton did bring up the possibility of certain designated times when night skating would be permitted.