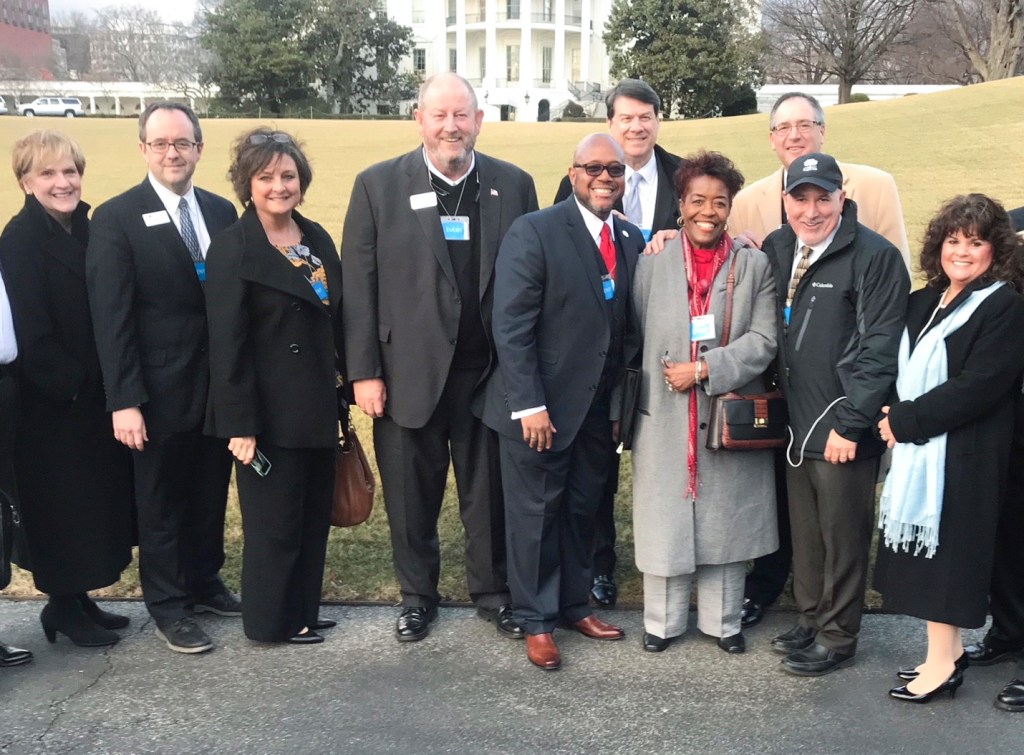 LaGrange Mayor Jim Thornton had to cancel several meetings to make it to the White House Wednesday, but nobody complained about having their appointment time changed.

After all, it’s not every day you get to meet the President of the United States.

“I had to call three people I had appointments with on Wednesday and say I need to reschedule and every one of them understood,” Thornton said with a laugh.

Thornton was one of 109 mayors from around the country invited to the East Room of the White House for a minute visit with President Donald Trump. The president had planned to spend more time, but he had to leave after a 15-minute speech to go to the World Economic Forum in Davos, Switzerland. The meeting had been scheduled then put in jeopardy by the government shutdown. That’s why Thornton, and probably several other mayors, had to rearrange their schedules to attend. The president thanked the mayors who attended.

“You bring safety, prosperity and hope to our citizens. My administration will always support local government and listen to leaders who know their communities best. And you know your community best,” Trump said. “We believe in local government. We believe in empowering each and every one of you. Together, we are achieving absolutely incredible results.”

During the meeting, Trump said his plan to rebuild the nation’s infrastructure would result in around a $1.7 trillion investment over the next 10 years, which was larger than the $1 trillion plan he had previously discussed.

The plan is expected to be officially discussed at next week’s State of the Union address. Thornton said the infrastructure plan was a big part of what Trump and Vice President Mike Pence discussed Wednesday. Following Trump’s time with the mayors, Pence spoke and answered a few questions.

“[Pence’s] emphasis was projects need to be geared toward creating jobs, new businesses, new housing starts, some type of economic benefit and his belief having been the governor of Indiana is that those decisions are best made at the local level,” Thornton said. “We even discussed with the staff that they are thinking about how they gather local input, whether they route all that through the state or if they deal directly with municipalities or regional planning agencies, etc. Of course, that varies from state to state, which creates some complexity, but my takeaway is they are at least very sensitive to the idea of gathering local input.”

“Sanctuary cities are the best friend of gangs and cartels, like MS-13. You know that. The result in the death rate around sanctuary cities — in and around — for innocent Americans is unacceptable. Take a look at what happened in San Francisco and Kate Steinle, and countless others,” Trump said. “My administration is committed to protecting innocent Americans and the mayors who choose to boycott this event have put the needs of criminal illegal immigrants over law-abiding Americans. But let me tell you, the vast majority of people showed up. OK? The vast majority. Because the vast majority believe in safety for your city.”

Thornton said he believes mayors have a duty to the citizens who elected them, meaning when the president calls, you go.

Thornton also visited during a similar event held by President Barack Obama during his time in office.

“From that perspective, boycotting the meeting never crossed my mind,” Thornton said.

As far as sanctuary cities go, Thornton said he’s not as “drilled down” into that debate.

The mayors also met with Justin Clark, Director of White House Intergovernmental Affairs; Jeffrey Rosen, Deputy Secretary of Transportation; D J Gribbin, Special Assistant to the President for Infrastructure Policy; Ryan Fisher, Assistant Secretary of the Army for Civil Works; and Pam Patenaude, Deputy Secretary of Housing and Urban Development. Many of those staff members offered to work with the mayors if they needed help with a federal issue in the future.

“While the draw was being in the East Room of the White House with the President of the United States, and that’s a huge draw and it’s why we all went, from an ongoing basis for LaGrange, having contact information and faces and some of the deputy secretaries at transportation and HUD and the core of engineers … could long-term be even more beneficial,” Thornton said.