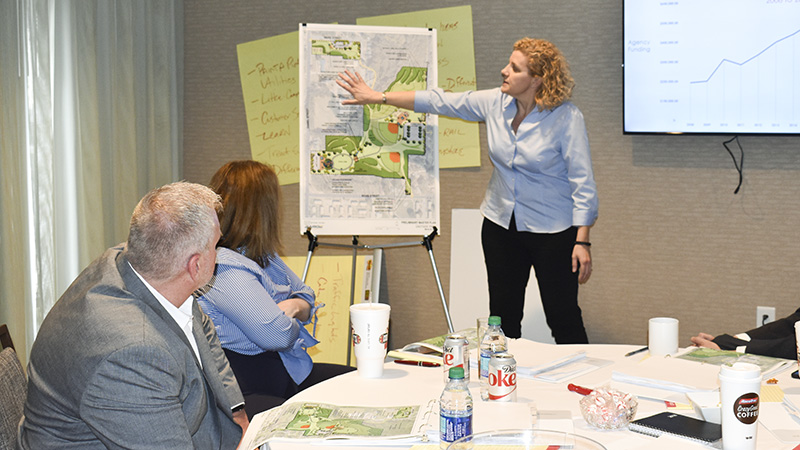 During a retreat earlier this week, the LaGrange City Council considered a preliminary plan for major renovations at Eastside Park.

The plans are still in the early stages and could change, but even with the likely minor changes, the park renovations hold what officials say is the potential to reinvigorate the neighborhood. The second segment of The Thread runs through the park.

Some of the highlights of the plan included an adult fitness area, a hillside playground, an 18-hole disk golf course and picnic areas. Existing features like the baseball fields would also receive attention as part of the project.

The plan is expected to be finalized sometime in April.

The team who developed the plan said that they hoped to accomplish several goals through the park.

“During the formulation of the master plan, we had several goals that we wanted to make sure that we met, and one of them was to develop an identity for the park,” said Raigan Carter of Barge Design Solutions. “You’ve already started doing that by having The Thread run through it and also having a trail head location in the northern sector of the park. We tried to further develop that by giving it an identity. One of the things that we are proposing is having a signature gateway at each of the entrances to the park, whether it is pedestrian or vehicular.”

“The second goal that we wanted to accomplish with this park was to activate the park, to bring more people in, and just make it a place where people want to go to, like a destination,” Carter said. “If they are traveling along The Thread, we want them to come and stay for a little while and experience what the park has available. To do that, what we have done is provide park elements and park opportunities for a variety of age groups and a variety of interest levels.”

In addition to items like the exercise area for adult park users, the city and park planners have discussed the possibility of Troup County Parks and Recreation offering more organized activities in the park. A walking loop in the park will also encourage exercisers to make regular use of the park.

Like all city parks, Eastside Park will be intended for daytime use. However, some areas use lights in order to make it easier for law enforcement to surveil.

“We are planning on lighting at the advice of our police department,” City Planner Leigh Threadgill said. “While the trail is not intended to be lit through its entire length, there will be locations along the trail that the LPD thinks are deserving of that, just based on historic calls for service levels. There is a plan to have some lighting. It is not to light it for night time use, but to allow for surveillance. Cameras are also being proposed.”

Additionally, the landscaping of the park is designed to allow for an easy line of sight and locations for recreation areas within the park were placed with safety in mind, according to Carter.

Council member Nathan Gaskin said that he would like to see improved approaches to the park in the form of landscaping and sidewalks in order to ensure that the park is used and that residents living near the park receive the maximum possible benefit of the project.