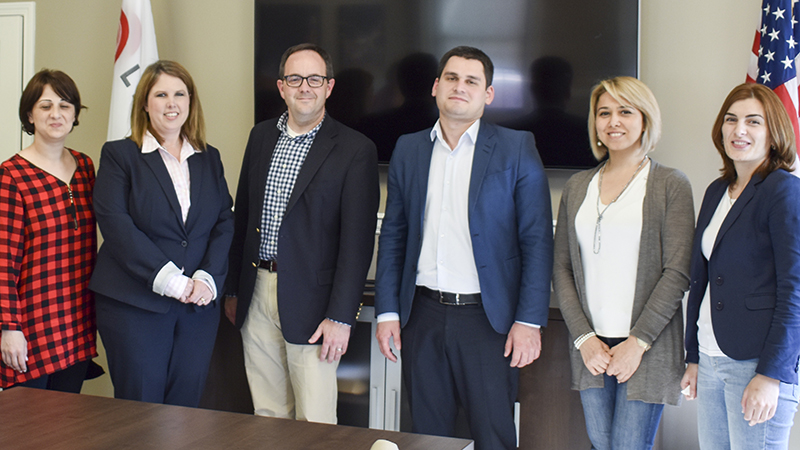 LaGrange City Manager Meg Kelsey and Mayor Jim Thornton pose for a photo with a delegation from the Georgian Ministry of Internal Affairs. --Alicia B. Hill

An official delegation from the Georgian Ministry of Internal Affairs in Tbilisi, Georgia, was in LaGrange this week for a police site visit. The group learned about the LaGrange Police Department’s community policing practices.

The group consisted of decision makers from the Georgian Ministry of Internal Affairs who are involved in planning and implementing community oriented policing initiatives in the Republic of Georgia.

LaGrange Police Chief Lou Dekmar, who serves as the President of the International Association of Chiefs of Police, hosted the group.

“They are trying to implement a community oriented policing program over in their country, and they wanted to see what we have done to be successful,” LPD Lt. Eric Lohr said. “So, we did some classroom [exercises] with them, went over all the initiatives and training that we do, and we spent quite a bit of time taking them around town and introducing them to many of the community partners — or folks in the community that we partner with.”

The site visit includes classroom instruction and riding with officers in patrol to observe their community policing efforts in action. The participants had the opportunity to meet with citizens, civic groups and business leaders with whom the LaGrange Police Department has partnered with in their community outreach initiatives.

“The biggest takeaway, I think, is the idea of getting the community involved on the front end of this,” Lohr said. “I don’t believe that they realized how significant or how important it is to have the community involved in these efforts from the get go and developing those partnerships with the community and the various agencies in town in order for this to be successful.”

The group also met with Mayor Jim Thornton and City Manager Meg Kelsey on Tuesday to discuss how the police and government work best together.

“I enjoyed meeting with them and am glad that they are moving toward a community based policing model,” Mayor Jim Thornton said. “They were interested to learn about LaGrange’s experiences because I think we have a good story to tell.”

In the past, LaGrange has had a sister city relationship with Poti in the country of Georgia. However, Thornton said that this was his first interaction with Georgian delegates.

“I think their questions and comments reminded me how important it is for our elected officials to always be supportive of our police, and to also look for ways to connect the police officers into the community,” Thornton said. “It was a good reminder.”

The delegation returned to the Republic of Georgia on Friday.