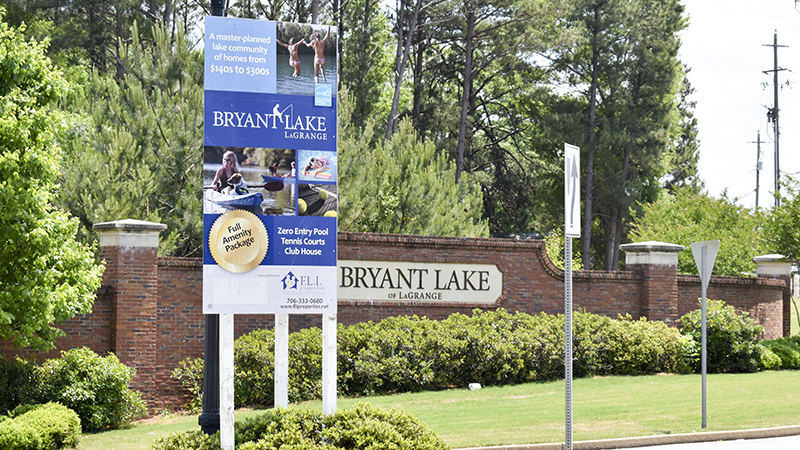 On Tuesday, the LaGrange City Council held a public hearing for the rezoning of a property on Hamilton Road and Bryant Lake Boulevard.

The property developer said that he would like the property rezoned from commercial to residential so that he can build a mixture of home types on the property. However, residents of the Bryant Lake community — directly behind the proposed development — worried that the high number of homes in the area could become a problem in the future. The rezoning has already been approved by the board of zoning, but the council’s approval is required in order to change the zoning.

“Currently, this property is a 134-acre wasteland and pretty much a crime scene at the entrance of a very nice development called Bryant Lake,” said Dennis Glenn Drewyer, the applicant. “This has become a public dumping ground, and it has access to the interior from old abandoned roads, which we think is a dangerous situation, so that just about anyone can get in. We are removing trash and appliances and things on a regular basis. We think a development here will improve not only the appearance, but the environment because of some drainage problems.”

He said that the plan that was developed in 2007 to use the full 134-acre property for commercial purposes was unrealistic, and he believes there is a need for housing in the area. The plan presented to the council on Tuesday shows a mixture of homes, villas and apartments in different sections of the property. The 34-acres of the property that border Hamilton Road will remain commercial, and Drewyer agreed to updated standards for that commercial use prior to the hearing.

Several residents of Bryant Lake expressed concern during the public hearing that the addition to apartments and additional housing in front of the existing community could negatively impact the value of their homes or encourage crime. A concern for the number of homes in that area was also expressed.

“I’m asking you that you deny this zoning change for additional multi-family and residential high density limited use in Bryant Lake,” said Kendall Butler, the declarant for Bryant Lake Residential. “If you see this master plan community, this was developed in 2007, and there was extensive discussion and planning around this development. It is already a mixed-use development. It is zoned for 972 housing units currently. This is one of the most dense housing units in Troup County already, and now we have a zoning change request asking to add another 520 units that will put 1,492 units in this master plan community.”

Drewyer said that while the two developments border one another, they should be considered as separate developments and asked that the council show no preference toward either developer.

“We are not Bryant Lake,” Drewyer said. “We are Long Cane Creek, and we are investing $20 million for purchase and development. We think this is going to turn into something that you will point to and say ‘that is what quality growth and quality development can be’ held to a standard by your [city] staff and this council and mayor.”

A builder for Bryant Lake also expressed concern for “fill zoning’s” impact on area growth, claiming that the rezoning could stunt growth in the area.

However, Drewyer said that the development was in line with the area’s character and would fill a housing need in the community.

“It is a time for smart growth and workforce housing,” Drewyer said. “The term workforce housing scares a lot of people. It is not cheap housing. It is the housing that the workforces that you need and that these corporations and new growth will need. It is some of your most valuable people that will be needed for this growth — your teachers, your police, your firefighters, public safety, new management and workers from these many companies, your veterans and those new graduates from college that you want to return to LaGrange to live here and maybe your children. That is who this housing is for. This housing will be affordable, not cheap.”

Drewyer said that if the rezoning is approved, construction would likely begin at the end of the summer. He said he expects the homes to sell for $200,000 or more apiece.

The City of LaGrange scheduled a vote on the rezoning for June 12, when the Development of Regional Impact review is complete.