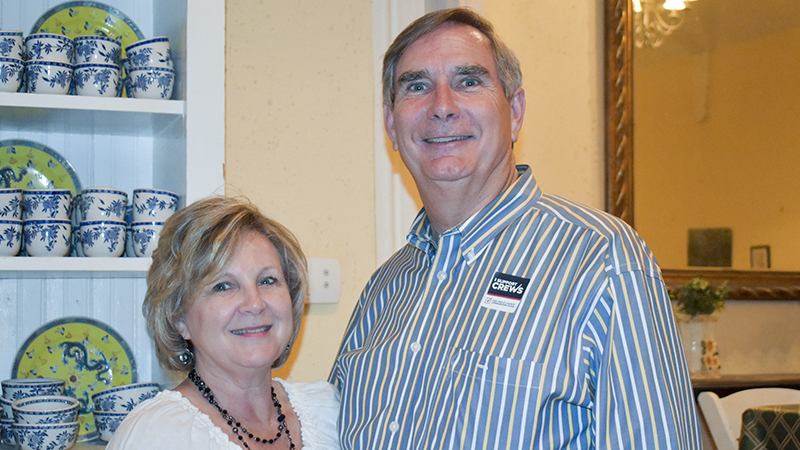 Because no one ran on the Democratic ticket, Tuesday’s win means that Crews will serve a second term as chairman unless an independent candidate challenges him in November.

The unofficial results for the election showed Crews receiving 3,070 votes or 70 percent of the vote. Tripp Foster received 1,287 votes or 30 percent. The results have not yet been certified.

The celebration followed hours where county commissioners, city officials and campaign supporters stared intently at their phones and a projector screen awaiting the primary results at Taste of Lemon. Crews won every precinct in the county, and he thanked the citizens for their support.

“I think the citizens of Troup County have affirmed the positive direction that this community is heading in,” Crews said. “The leadership that they’ve allowed me to stay there for another four years for them. It is going to be an exciting time over the next four years, and I am ready to do the job.”

Crews said during his campaign that he planned to work to ensure that items from the Special Purpose Local Option Sales Tax that benefit county residents are seen to completion. Some of the county specific items from SPLOST V were a new county fire department headquarters, a new agricultural center, a new public facility at Pyne Road Park and a variety of road and bridge projects.

“We’ve got items already on our agenda that we want to look at,” Crews said. “As far as I’m concerned, it is business as usual tomorrow. We’ll be right back doing the things we were doing two weeks ago.”

He credited the people who worked with him on his campaign for the win.

Foster, who ran against Crews in the race, said that he still hoped to see many of his goals accomplished despite his loss, and that he still planned to work with local officials to make the county a better place.

“I want to see LaGrange, Hogansville, West Point and all of Troup County move forward, and I am willing to work with the commissioners and work with other county officials to help them see that happen,” Foster said. “I wish that I would have won. … I will tell you that I love this community, and I want to see the best for this community. So, I want to help them get some things done as a citizen.”

The unofficial results for the election showed Crews receiving 3,070 votes or 70 percent of the vote. Foster received 1,287 votes or 30 percent. The results have not yet been certified.

Applebee’s in LaGrange appears to be permanently closed